As coastal population centers continue to proliferate around the world, developing a deeper understanding of ocean wave dynamics has become an urgent matter for protecting lives and livelihoods. The tsunamis that follow major earthquakes at sea are immensely destructive, as are the storm surges accompanying hurricanes. It is not a question of if these events will occur, but when. Therefore, preparation seems to be humanity’s best defense, achieved through the development of more wave and erosion-resistant coastal structures and better evacuation plans.

Such objectives describe the mission of the George E. Brown, Jr., Network for Earthquake Engineering Simulation Tsunami Research Facility (NEES TRF) at the Oregon State University College of Engineering O.H. Hinsdale Wave Research Laboratory (HWRL). It is one of the world’s largest and most sophisticated facilities dedicated to research and innovation in coastal and ocean engineering and near-shore science. Wave simulation technology was pioneered at HWRL in 1971, and the facility has provided critical support for the international research community ever since. Work at NEES TRF is influencing how human beings interact with oceans, including where we live, how we preserve coastal ecosystems, even how we generate energy.

Scale represents a primary and ongoing challenge for fluid mechanics research in general, and for NEES TRF in particular. A majority of wave mechanics and coastal erosion studies do not accurately scale up from smaller models, so there is a constant desire among researchers to develop larger facilities for testing as close to prototype size as possible. With increased scale comes the related challenge of containing costs, due to the advanced facilities, technology and talent required to support such testing.

“Many valuable testing capabilities, such as generating the long waves common to tsunamis and storm surges, have been lacking in this field because no test facilities were large enough to support them,” said Dr. Solomon Yim, Professor of Ocean and Structural Engineering at OSU, HWRL Acting Director and NEES Principal Investigator. “It was our goal – and our challenge – to continue expanding to make more and more useful modes of testing available.”.

Over the last four decades, MTS and HWRL/NEES TRF have successfully completed several facility expansions together. According to Dr. Yim, MTS played a key role with each expansion through facility planning, hardware and software specification, system integration and ongoing maintenance.

“MTS was instrumental in completing necessary algorithms in the control room, along with cabling, control and actuation scheme configuration,” Dr. Yim said. “MTS was especially helpful in making userdefined long wave capabilities available through our Large Wave Flume, which is a key requirement for tsunami researchers.”

The Large Wave Flume measures 104M (342’) long, 3.7M (12’) wide and 5M (15’) deep, and was jointly developed by MTS and HWRL in 1972. An advanced, pistontype hydraulic actuator assembly on the Large Wave Flume was installed in 2009, replacing the original hinge wavemaker also built by MTS in 1972. The new actuator assembly produces stroke and velocity up to 4M (13’) per second.

Dr. Yim cites funding as the ultimate deciding factor for each expansion. “When we wrote our proposals, we relied heavily on MTS technical acumen and facilities planning expertise to help us make a case for how our expansions would support international researchers and ultimately benefit the public,” he said. “I believe our thorough proposals had much to do with the significant financial support we have received to date. That includes two large NSF equipment and instrumentation grants in a row, which rarely happens.”

By continuing to increase the scale and sophistication of its test facilities, NEES TRF has made it possible for engineers worldwide to glean unprecedented insight into wave dynamics and the potential impact of oceanic events on humanity, enabling the development of more durable structures and more effective evacuation strategies.

“We can cover the full range of related studies here, including everything from simulating conditions miles out into the ocean to those along the coastline and even inland,” Dr. Yim said. “Through all of the change at NEES TRF, MTS technology and personnel have remained a valuable constant. We also get routine maintenance from MTS through NEES, which has helped us manage costs by keeping our test systems and uptime at their peak.”

As for the future, Dr. Yim sees a high likelihood of further expansiona at NEES TRF, especially considering the urgent need for continued research to better understand tsunami effects on coastal regions.

“Wave dynamics become increasingly nonlinear as you move closer to the coastline, which makes scale models even less effective, so I anticipate that our test systems will have to become even larger,” he said. “And when that time comes, we will certainly look to MTS to help us create the proposal, which will hopefully lead to yet another expansion.” 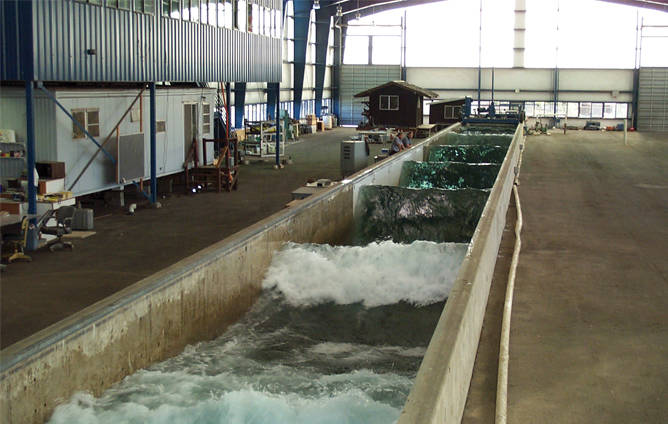