For decades, the University of Toronto’s Mark Huggins Structures Laboratory has been making a significant global impact in the field of civil structural engineering. The research conducted there on the behavior of reinforced concrete under extreme conditions now provides the theoretical basis for Canadian and American bridge and building code shear provisions. It is also influencing new model codes in Europe.

The laboratory’s structural test engineers have long applied a unique combination of experimentation and analysis to their research. In 1984, Professor Michael P. Collins developed the Shell Element Test (SET) system – a very flexible and powerful research tool – to study the behavior of large (1.626 m x 1.626 m) reinforced concrete elements subjected to in-plane and out of plane forces. From the start, the specimens tested in the machine were intended to model sections of bridges, nuclear containment vessels, and offshore oil platforms. The system would also serve as a means for validating the Modified Compression Theory developed at the laboratory.

More recently, as concrete materials science has undergone significant advances, engineers at the lab began to sense limitations in the SET system’s capabilities.

“Practically available concrete strengths have gone up by a factor of three over the last two decades, which has made it possible for much smaller reinforced concrete members to carry higher loads than previously possible,” said Dr. Evan Bentz, a Professor of Structural Engineering at the university’s Department of Civil Engineering. “These advances have introduced all sorts of fascinating new concrete material behaviors. But they have also exposed weaknesses with the original SET system.”

In 2007, Bentz and Collins realized that they needed to be able to test specimens with a far higher level of control and precision in order to keep pace with the industry. Since concrete structural failures typically play out in a nonlinear fashion, the upgrade would have to include the ability to correlate test data acquired with exactly the loads and moments applied at any given moment in time.

“We had deep resident knowledge of how the original SET system worked, but we did not possess the expertise in advanced control technology and system integration required to achieve the capabilities we wanted,” Bentz said.

After securing a grant from the Canada Foundation for Innovation, a government research agency, to upgrade the SET system, the lab began accepting requests for proposals. “We expected that two different resources would be needed to help complete our upgrade: one to tell us what was possible, and a second to actually do it,” Bentz said. “We were pleased to discover that one resource could accomplish both. That is why we chose MTS.”

So, whereas the original system provided only pressure control of groups of actuators, the upgraded system affords load and displacement control of each individual actuator simultaneously, enabling the execution of more sophisticated, real world test profiles and the acquisition of higher resolution data. “The previous system of banks of jacks going out at a given pressure was quite functional and simple, but to get the control we needed for higher strength, more brittle concrete, the ability to control  individual displacements was required,” explained Bentz. “The flexibility of control options in AeroPro software is exactly what we needed to control this many channels in an elegant way.”

“With our new control, actuation and software capabilities in place, the concrete specimen is basically floating in space, and we can apply specific loads and moments in any direction at any time,” Bentz said. “We can now subject concrete shell elements to all eight possible force components, while maintaining tight control.”

According to Dr. Bentz, the upgraded SET system brings the Mark Huggins Structures Laboratory significantly closer to simulating the real-world operating conditions of today’s reinforced concrete structures. That includes the ability to closely examine the impact of seismic events and even explosions, as well as failure mechanisms that manifest only over protracted periods of time.

“Our original SET system served us well, but it limited our possibilities because it was a static system,” Bentz said. “Now that we are equipped with a high-precision dynamic solution, we can get a detailed picture of exactly what’s going on during mechanical failure, under a broad range of loading scenarios. Far fewer assumptions have to be made.”

“I think we are about to discover some interesting new science here,” Bentz said. “And we are more confident than ever in our ability to make accurate predictions of how long a bridge will last while in service.”

Bentz cites MTS’ expertise and professionalism as vital to the success of the SET system upgrade. “The communication was excellent both during and after the implementation,” he said. “Without fail, we’ve found MTS representatives to be professional, capable and always willing to help in whatever way necessary.”

“The entire setup works exactly as we hoped,” Bentz said. “We couldn’t ask for much more.” 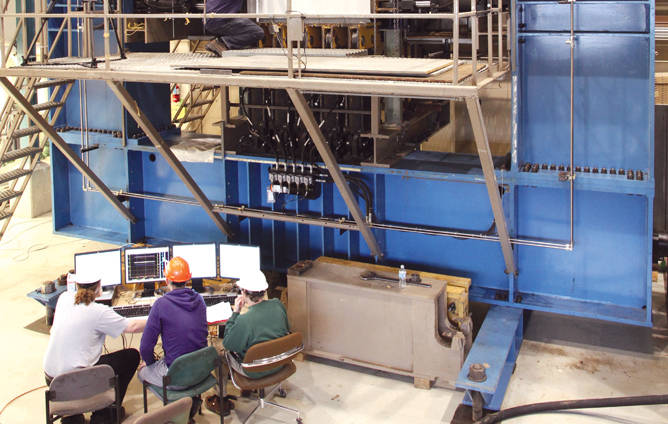