Professor Carol Shield, Ph.D., and her colleagues at the Multi-Axial Subassemblage Testing (MAST) Lab at the University of Minnesota are performing real-world seismic simulations on full-scale civil structures to verify design codes, and explore new materials and systems to optimize civil project safety and cost-effectiveness. To achieve the extremely large loads and strokes required for these multi-axial simulations, they partnered with MTS to develop the world’s highest capacity 6DOF mechanical test system.

Design codes drive the structural engineering world. Although based on empirical research, the test procedures used to define these codes have been historically limited to small-scale specimens and uni-axial actuation. In other words, these tests were conducted in what Professor Carol Shield, Ph.D., calls “a fairly unrealistic manner.”

Dr. Shield is the director of the Multi-Axial Subassemblage Testing (MAST) Lab at the University of Minnesota in Minneapolis. The lab is part of the George E. Brown, Jr., Network for Earthquake Engineering Simulation (NEES), which connects 14 research facilities across the U.S. to promote the science of earthquake engineering. As part of NEES, the lab seeks to subject large structures and components to real world forces and motions in order to verify design codes, as well as explore new materials and systems to optimize civil project safety and cost-effectiveness.

At the outset, the primary challenge for the lab was the sheer size of the test articles. To ensure realistic testing, the lab needed to perform simulated seismic loading on nearly full-scale specimens with multiple-degree-of-freedom actuation. The sizes, loads and strokes required were extremely large. So large, in fact, that no test lab in the world had yet achieved them.

“We sought to be the first facility capable of performing highly accurate tests on full-scale civil structural specimens, including the ability to apply loads realistically in multiple axes,” Dr. Shield said. “We knew it would be a formidable task to test such enormous specimens. That’s why we chose to work with MTS.”

“We have essentially taken a standard material test system and supersized it,” Shield said. “Its massive force capacity allows us to test very large specimens all the way to failure. We are testing structures in ways nobody could do before. To my knowledge, no other seismic test system operates on such a large scale.”

The system’s size and functionality enable testing that is much more realistic than previous methods. It will allow the University of Minnesota and other researchers in the NEES network to generate actionable data to improve design codes and help develop a new generation of safer, more durable structures. Ultimately, this experimental research will help large structures better withstand earthquakes, hurricanes and other catastrophic events.

The solution is already extremely popular with other NEES researchers. As part of NEES, the University of Minnesota lab offers shared use for other teams conducting experimental seismic research. Teams from around the world can visit the lab to perform tests, or work with the lab’s team remotely via live video and data sensor streaming. Shield recently observed engineers assuming real-time control of the test system crosshead from as far away as New Zealand.

“Our lab is very much in demand, because other earthquake engineering researchers clearly see the benefit of large-scale multi-axis testing,” Shield said. “Since we opened, we’ve had maybe one month where the test system wasn’t cranking away at full capacity.”

Dr. Shield and her team have already unearthed valuable performance data certain to prompt design code changes, and they expect to advance both structural engineering and public safety with their multi-axial large-scale civil structural testing solution.

“We discovered that the design codes for slab-column connections on concrete over-predict structural performance under realistic seismic loading,” she said. “Tests using our system revealed that the original tests did not provide accurate boundary conditions and loading, which calls into question the adequacy of the current codes. Now we can update them to make structures more reliable. We would not have seen this shortcoming with a conventional test system.”

The laboratory is also examining how concrete columns designed prior to the introduction of seismic codes might hold up or eventually collapse under large loads. This work will help identify structures that are at risk of catastrophic progressive collapse during an earthquake, and ultimately provide a key to remediation. Other areas of investigation include testing nonrectangular concrete sheer walls at near full-scale, which has never been done bi-directionally, and testing new brace frame designs that may offer a safer and more economical alternative to current moment frames in steel buildings.

Supporting all of this research is a strong working relationship with MTS.

“This was the biggest project I’ve ever done with MTS, and it was a joy,” Dr. Shield said. “We relied heavily on MTS expertise through all phases of designing and installing the hydraulic system, actuator system, swivels and controls. We could not have asked for a better partner.”

As one of nine NEES labs on a centralized maintenance contract with MTS, the lab receives regular system inspection, cleaning, hydraulic fluid care, and professional calibration and alignment from MTS technicians. These preventive measures help to curb operating costs and maximize system uptime, so that this one-of-a-kind test system is readily available for test engineers across the NEES network.

“With the ability to share our unique testing capabilities with the larger community of seismic researchers, we are entering an exciting new era in civil structural development,” Shield added. “Our collective research is creating a much clearer picture of how buildings, bridges and other critical structures can be designed to withstand real-world seismic forces.” 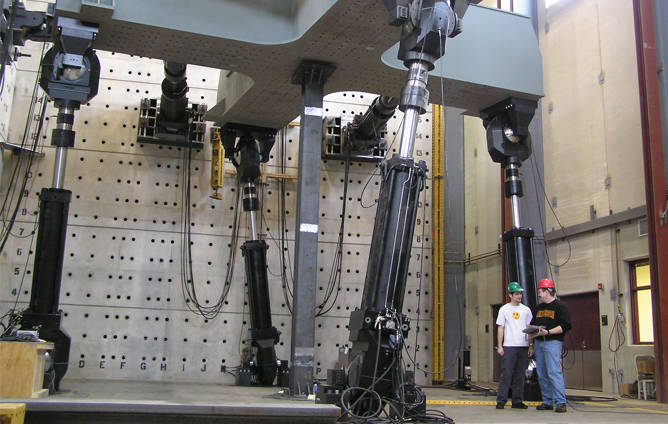