PD Dr. Annette Kienle and her colleagues at SpineServ in Ulm, Germany specialize in testing orthopedic devices for the spine, including spinal disc implants, osteosynthesis devices, and endoprostheses. Upon recognizing the critical market need for accurate and repeatable wear testing of artificial spinal discs, they first explored developing their own simulator in-house, then turned to MTS and the multistation Bionix Spine Wear Simulator.

Located in Ulm, Germany, SpineServ GmbH & Co. KG is a test laboratory that specializes in orthopedic devices for the spine. It offers a wide variety of testing services for spinal disc implants, osteosynthesis devices, endoprostheses, surgical instruments, and the materials used to manufacture these products. SpineServ also consults with a range of clients about the biomechanics and ergonomics of the spine. In 2008, it was recognized as one of the top-ranked startup companies in the state of Baden-Württemberg.

Drawing on a multidisciplinary background in mechanics, biomechanics, medicine, engineering and biology, the lab’s expertise in testing spinal devices is unparalleled. As a spin-off of the Institute for Orthopedic Research and Biomechanics at the University of Ulm, SpineServ also maintains a strong connection to the latest research in the field, which its teams can apply directly to the development and fine-tuning of testing procedures.

Since its inception in 2007, SpineServ has acquired a numerous test systems for conducting both static and dynamic testing. What it lacked, however, was the ability to perform accurate and repeatable wear testing, which is critical for the approval of new disc implants and cannot be performed with standard uniaxial or biaxial test systems.

“The market for artificial spinal discs is strong, so we needed to add this capability to our lab,” said PD Dr. Annette Kienle, managing director and one of SpineServ’s founders. “It was essential that the wear simulation system be able to test multiple implants simultaneously. One test runs 10 million cycles at 1 Hz, so it takes four months to complete. ISO standards require at least six tests. Doing them sequentially would take two years, which is obviously unacceptable for implant manufacturers.”

SpineServ had considered developing its own wear simulator in-house, but determined that the process would have taken too long. So, it began searching for a solution that could meet its simulation needs completely and quickly. Ultimately, this led SpineServ to MTS.

“The Bionix Spine Wear Simulator is the only system we could find that tests six implants at the same time,” Kienle said. “It was developed to satisfy ISO 18192-1, which is the current standard for wear testing of artificial spinal discs. This is a big advantage for us because all accredited test labs need to provide proof of compliance.”

In addition to precision control in four active degrees of freedom, the Bionix system features an X-Y translation platform that passively accommodates motions in the remaining two.

The complete system, which was installed in the SpineServ test lab in 2009, includes FlexTest® 60 digital controls, Multipurpose Testware® software, and a 505.11 SilentFlo™ HPU, along with optional temperature control and an optional reference station for load-soak testing.

“The Bionix system accurately replicates the forces, motions and conditions that artificial spinal discs must withstand when they are implanted in the patient,” Kienle said. “It allows us to apply precise loads and motions in a repeatable fashion, as well as capture all of the data in detailed time histories, which is critical for building the case for a new spinal implant.”

The Bionix Spine Wear Simulator is the first of its kind sold anywhere in Europe, affording SpineServ a unique competitive advantage.

“Other test labs simply can’t offer the same wear testing capabilities as SpineServ now that we have the Bionix system in place,” Kienle said. “That means our clients can use one lab to test new artificial discs not just for static and dynamic mechanical behavior but for wear resistance as well. This helps save time and money, and it is much more convenient for the implant manufacturer.”

“The Bionix system runs very well and meets all of our specifications,” Kienle said. “When a few minor issues came up after installation, MTS quickly found the source of the problem and fixed it in a way that was very convenient for our lab. Overall, the machine is highly reliable. We are very satisfied with the spine wear simulator, as well as the responsive support we receive from MTS, because it helps us take full advantage of the system’s capabilities.” 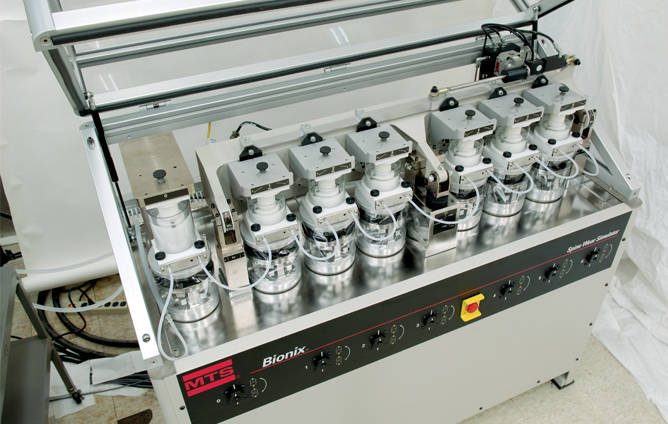