Founded in 1980 in Verona, Italy, Orthofix International is a leading medical implant device manufacturer for the spine, orthopaedic and trauma markets. The company conducts a variety of mechanical tests and simulations for product development purposes, as well as to validate device performance prior to regulatory submission and product launch to the marketplace.

“We had been using the Bionix system for all of our static and dynamic testing for years, but demand was consistently going beyond what the schedule for this test system could support,” said Denis Lorenzini, Product Development Engineer at the Orthofix Italy R&D department. “It was becoming clear that we needed a second test system to address the increase in product development activity.”

Due to limited test laboratory space and a desire to maximize every capital expenditure, Orthofix Italy wanted its next test system to be compact in size and as cost-efficient as possible to purchase and own. This new system also had to be compatible with a proprietary screw rotation simulator developed for the Bionix system.

The Orthofix R&D team sought the expertise of MTS to help them procure a second load frame that best addresses their lower-force test requirements. “Our minds first went to ordering an MTS Mini Bionix system since we’ve had so much success with the first Bionix system,” Lorenzini said. “But when MTS showed us its new electrodynamic load frame, we knew we had found our ideal solution. We immediately ordered a 1.25kN MTS Acumen system.”

The versatile, compact MTS Acumen™ test system employs electrodynamic actuation to provide an easy and energy-efficient means of expanding in-house testing capabilities, with minimal impact on existing operations. The load frame consumes far less energy than other technologies. Power is supplied by simply plugging the system into a conventional electrical outlet, with no required hydraulic pumps or related infrastructure.

“The MTS Acumen system is extremely clean, quiet and simple to use and maintain,” said Graziano Marini, Test Engineer at the Orthofix Italy R&D department. “The smaller load cells and specialized grips are ideally suited for testing our screw designs, and we are especially impressed by the T-slotted table that greatly simplifies specimen mounting. The system is also very compact, with the whole test station occupying just one square meter of floor space.”

In addition to the MTS Acumen system, Orthofix invested to upgrade their new MTS controller by adding an additional board. This additional board provides the control functionality for their proprietary screw rotation simulation that is vital to testing new screw designs. The team was pleased to learn that the new upgraded controller and software make it possible for both the Bionix and MTS Acumen load frames to be used from within a single user experience.

Orthofix Italy is currently using the MTS Acumen system to conduct static lifecycle tests and axial tension-compression fatigue evaluations on a variety of its products. Tests originally performed on the Bionix system are easily replicated using this new load frame. One such test involves screws inserted into a synthetic bone material at various twisting speeds and axial loads. Insertion and extraction torque values are recorded by an integrated torquemeter, offering valuable insight into each screw’s cutting, stabilization and overall performance characteristics.

“We now have greater capacity to take on a higher volume and wider variety of tests, which allows us to move through our development testing activities schedule in a much more efficient manner,” Lorenzini said. “The MTS Acumen system has freed up our Bionix system to handle the higher-force testing, improving our ability to bring new technologies to market faster. And since the MTS Acumen system requires so little power to run and labor hours to maintain, it has had a minimal impact on our energy and operational expenses.”

The R&D team will partner with MTS again when it’s time to make capability enhancements and technology upgrades at the Orthofix Italy test facility.

“MTS has been instrumental in helping us adapt to the evolving requirements of both our internal product development teams and the outside surgical community that we support,” Lorenzini said. “Our open exchange of ideas with MTS will be essential as we continue to expand our testing capabilities in the future.” 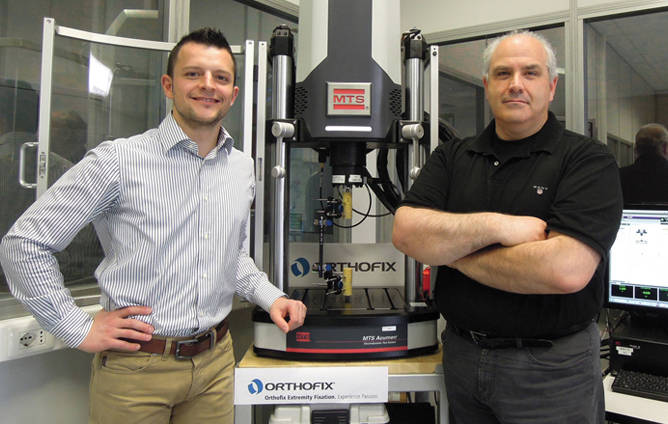