Orthopaedic implantable devices for small extremity applications pose difficult testing challenges for device developers. Typically constructed from nickel-titanium alloy, these thin wire implants are anchored to a patient’s small joint, such as in a finger or toe. Difficulties arise because the interface between the implant and the bone is highly variable and tends to produce complex interactions during fatigue & durability bench testing.

Device manufacturers need to analyze these interactions closely as they test different pairings of materials and bone. Sudden changes in specimen behavior due to degradation require the test system be able to maintain precise load control despite persistent stick/slip behavior. Without this ability, test systems are not able to generate the data developers need to characterize the implant’s durability and performance.

The small physical size of the implant further complicates the test which often requires a combination of low force (5 to 10 N, peak to peak), relatively high frequency (10 Hz) and low displacement (1 to 2 mm) for millions of cycles.

To perform the test with a conventional material test system, device developers often compromise by using a higher-than-ideal force (20 to 30 N, peak to peak) and a lower test frequency (2 Hz). These compromises mean that tests may yield less useful data and take more time. The interactions that developers wish to study in greatest detail may fall within the noise band of normal filtering. Slower tests can cost manufacturers’ critical weeks in time to market.

MTS Acumen systems are specifically designed to provide precise load and motion control, with a rigid load frame and direct-drive linear motor. These systems also offer unique integration with test software, which enables automated tuning. Automated tuning is helpful for unpredictable specimens because the software works independently to detect and enter specimen parameters. By “learning” what to expect from the specimen, the system is better able to recognize variations that cause uncertainty – and adapt accordingly during test execution.

A key component of the solution for this application is the MTS FlexTest Digital Controller. This reliable control architecture is what enables the MTS Acumen system to deliver the frequency response necessary to maintain high accuracy while applying a low force at a high speed as interface stability varies. MTS FlexTest controllers represent decades of MTS expertise in solving industry- and application-specific load control challenges. 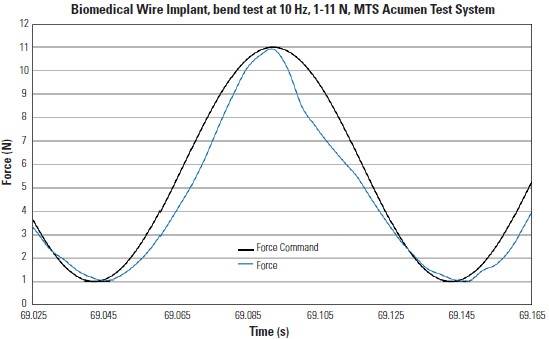 Biomedical implant being fatigue tested with end levels of 1 to 11 Newtons (N) at 10 cycles per second (Hz). Comparing this plot to Figure 2 shows specimen introduces disturbances and non-linear behavior which can create control problems for some machines. 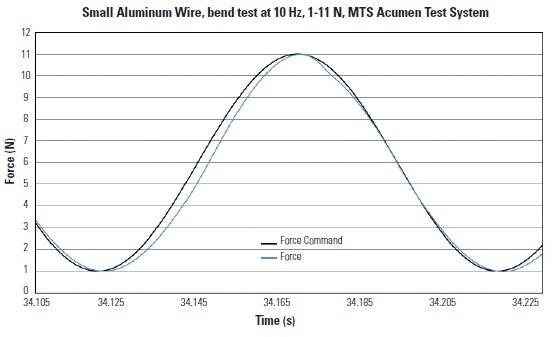 A piece of aluminum wire being tested under the same conditions as the implant specimen. You can see that without the disturbances introduced by the specimen, the MTS Acumen Test System has very high waveform fidelity at low forces and high frequency. 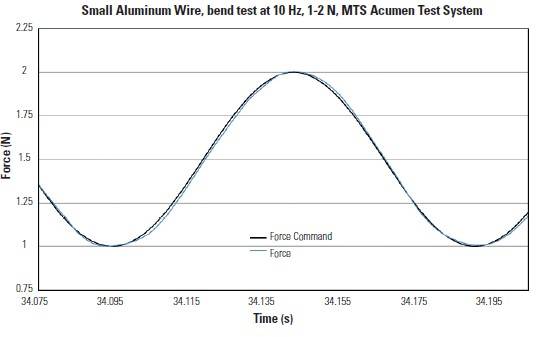 A demonstration of the MTS Acumen Test System capabilities for even lower force testing. The end levels are 1-2 N. Note the nearly perfect waveform even at 0.1% of system capacity.

Higher frequency testing may deliver a five-fold improvement in time to market, depending on the specimen. For example, completing five million cycles at 2 Hz takes nearly a month, while the same test run at 10 Hz can be completed in less than six days. Combined with a low force test that achieves the necessary realism, faster speeds help developers test more options with fewer test systems and respond faster to post-submission requests from the FDA and other regulators. 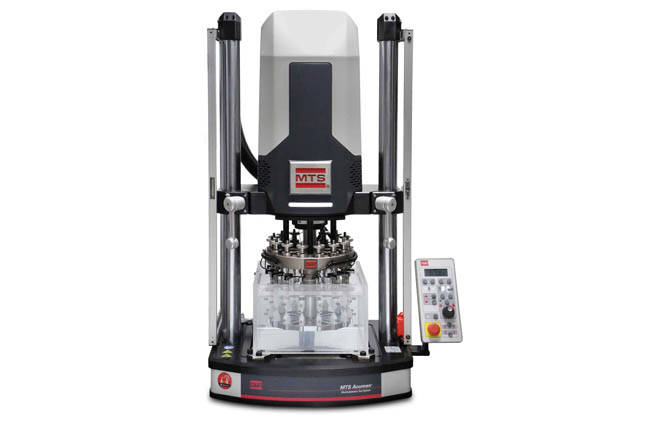