How can wind tunnel testing be made as realistic as possible for motorsports vehicles? Ask anyone in the industry, and you’ll probably get the same answer. It can be done by replacing the fixed floor with a moving surface that travels at the same speed as the wind.

“Unlike the real world where a car is moving and the air and road are fixed, a fixed-floor tunnel pushes wind across a car and floor that aren’t moving,” said Jeff Bordner, site manager at Concord, North Carolina-based Windshear Inc. “This creates a boundary layer, which is an envelope of reduced wind velocity along the floor due to frictional losses. Racing vehicles are typically one to three inches off the ground, which is well within this boundary layer. As a result, fixed-floor tunnels do not accurately simulate real-world aerodynamic phenomena.”

In contrast, most passenger cars offer at least six inches of clearance, so the adverse effects of the boundary layer are not as critical. Fixed-floor wind tunnels have historically been suitable for testing a vast majority of vehicles under development. However, with increased emphasis on underbody aerodynamics for passenger vehicles, more OEMs are feeling the need to move to rolling road wind tunnels as well.

“No full-scale rolling road wind tunnels were available in North America, so U.S. teams had to fly to Europe for this type of testing,” Bordner said. “And that was only if they could get into one of the few facilities that allowed outside racing teams to test.”

Windshear was formed in 2006 to fill this void in the U.S. marketplace. “We saw such a need for this type of a wind tunnel that we decided to build one that any team could use,” Bordner said. To attract top racing teams, the facility would have to facilitate superior testing accuracy and repeatability. It would also have to support the highest throughput possible to keep the operation profitable for Windshear.

The project was funded by Haas Automation, the company that owns Windshear. Facility design and construction were overseen by Jacobs Technology, the undisputed global leader in wind tunnel development. Engineers from Jacobs Technology also manage the day-to-day operation of the Windshear rolling road wind tunnel.

The MTS Flat-Trac® Rolling Road measures 10.5 feet (3.2 meters) wide by 29.5 feet (8.9 meters) long. It easily keeps pace with the wind, accelerating from zero to 180 mph (289.6 km/h) in less than a minute. This “road” is actually a continuous stainless-steel belt just one millimeter thick. During testing, through-the-belt sensors precisely measure the aerodynamic downforce under each tire.

Testing at Windshear is performed with absolute confidentiality. All test data files are erased from Windshear servers once a customer’s testing is complete. The facility is also physically configured so that no two racing teams see each other’s vehicle at any time.

“This is an exciting new opportunity for motorsports vehicle developers everywhere,” Bordner said. “Instead of asking a private facility for time, top racing teams now have a secure, state-of-the-art facility readily available to them.”

Today, the facility’s 40-hour weekly operating schedule is filled with NASCAR and IndyCar Racing teams from all over North America. Teams from Europe and Asia are also bringing their wind tunnel testing to Windshear, drawn by the facility’s state-of-the-art capabilities.

“The relationship between MTS and Windshear allows us to stay on the leading edge of technology, and motorsports developers are taking notice,” Bordner said. “Additionally, MTS gets full access to our working, state-of-the-art laboratory and the opportunity to apply new advances in a real-world setting. And we get to offer new capabilities that are not available anywhere else. Instead of merely keeping up with rolling road wind tunnel facilities overseas, we’re taking the technology lead.”

According to Bordner, MTS was instrumental in helping to optimize testing accuracy, repeatability and throughput at the Windshear facility. “We relied heavily on MTS’ expertise in rolling road installations, which was invaluable in helping us achieve high levels of data integrity and throughput,” Bordner said.

In September 2008, Windshear co-hosted the MTS Rolling Road Users’ Group meeting. The two-day meeting, held in Concord, North Carolina, allowed wind tunnel operators to get together, share best practices and learn about the latest technology. That included a comprehensive tour of the Windshear facility.

“We jumped at the chance to co-host this meeting, because the idea behind it matches our open approach to technology,” Bordner said. “Now that Windshear, MTS and Jacobs Technology are collaborating here at the Windshear facility, there’s less of a need for others to keep things so secret. It will be interesting to see what gets accomplished when all of this expertise gets pooled together.”

Within the TMG facility, automotive developers can take advantage of rapid prototyping, complete machine tooling, full-scale and partial-scale rolling road capabilities, and advanced driveline, steering and component testing. All of this functionality is integrated to produce superior test data and help get better designs to market faster and for less money.

According to Gehlen, MTS has been essential to TMG’s smooth transition from OEM test lab to contract test facility. “Two MTS engineers have been onsite at TMG beginning at the earliest stages of our Formula 1 program, and they have been a major contributor to our company ever since. Without exception, MTS has demonstrated its ability to intimately understand our objectives and identify the best solutions to help us meet them.

“TMG now has the right technology, the right expertise and the right test solutions partner to take our place among the world’s most advanced automotive contract testing facilities,” Gehlen said. “Now it’s simply a matter of getting the word out, because we have something here of tremendous value to a wide variety of automotive developers.” 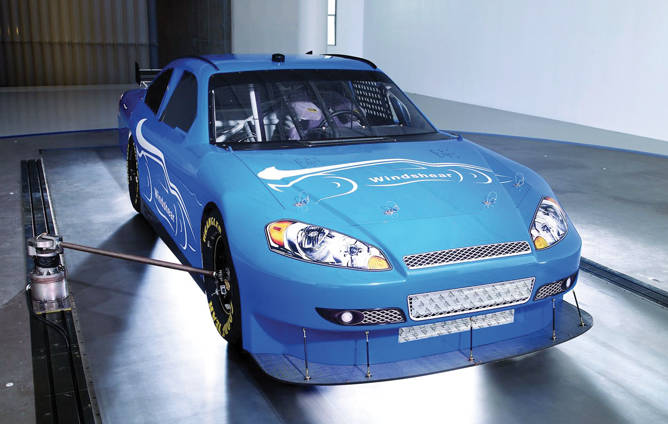