What sets the company apart is its flexibility, according to Kris Moria, Technical Team Leader for Testing and Instrumentation within Tenneco’s European Ride Performance Division. While some suppliers prefer to focus on standardized products, Tenneco often adapts its designs to meet unique or emerging OEM needs, from new passive valve systems to specialized components for a suspension system.

“We listen to our customers to find out exactly what they want,” Moria said. “We collaborate with them to develop appropriate solutions for the new technologies they are bringing to market. The ultimate goals are driver comfort and an increased feeling of safety, so we try to be flexible and our customers appreciate it.”

The willingness to adapt is one of Tenneco’s biggest advantages, especially when itcomes to product development and testing. The company primarily produced passive shock absorbers. Then OEMs began to request more complex dampers that needed to be tested with a variety of velocities, frequencies and stroke lengths, so tests involve standard measurements as well as currents, pressures and other inputs.

accuracy,” Moria said. “It’s much more complex now than ever before. It’s critical to control all these signals.”

Tenneco first implemented EMA damper systems in its mobile ride tuning trucks, which are mobile test labs deployed at customer proving grounds. During product development, tests on new shock absorbers can be run in the trailer based on road load data. Then the dampers can be tuned, placed back in the prototype vehicle, and used to acquire a fresh data set. EMA damper systems are ideal for this application because they are small and require only a power outlet for operation. They also offer more flexibility than the previous generation of crank-style dynamometers.

“Crank dynos are purely mechanical systems, so changing the stroke length is a mechanical job,” Moria said. “And they only offered velocities up to 1.5 m/s. EMA damper systems have longer stroke lengths and velocities up to 2 or 3 m/s if necessary. It’s very easy to make these changes, so test efficiency is higher and we can provide much more flexibility for our customers.”

Tenneco uses the EMA damper systems in production as well. Typically, the team pulls a batch of products off the line to make sure the individual components—even if their specific geometries remain in tolerance individually continue to deliver the expected damping performance after they are assembled. In this environment, EMA damper systems have an advantage because they are easy to install and less expensive to operate than larger servo hydraulic systems.

Most recently, Tenneco has begun deploying the EMA damper systems in its engineering labs. Here, R&D teams appreciate the systems’ high frequency response (>100 Hz) and operational efficiency, as well as testing software that is specifically designed for shock absorber development.

Since 2008, when Tenneco first added EMA damper systems to its mobile ride tuning trucks, the company has steadily expanded the footprint of these test systems throughout the Ride Performance division in Europe. The reasons why they perform so well are manifold—starting with all-electrical actuation.

“All-electrical actuation is a big advantage,” Moria said. “You don’t need the power pack or the cooling system. And the performance is very good for a wide range of frequencies and velocities, without having to tune the systems very often. That’s why we like them.”

Another benefit for Tenneco is the fact that electrically actuated systems are cleaner and quieter, faster to setup, and easier to maintain and repair than other systems. Service and support from MTS helps round out the complete solution.

“At the end of last year, we set up an exchange program for the computers connected to five of our EMA damper systems,” Moria said. “The software was pre-installed by MTS and when we hooked them up, it was plug and play. We were really pleased.” 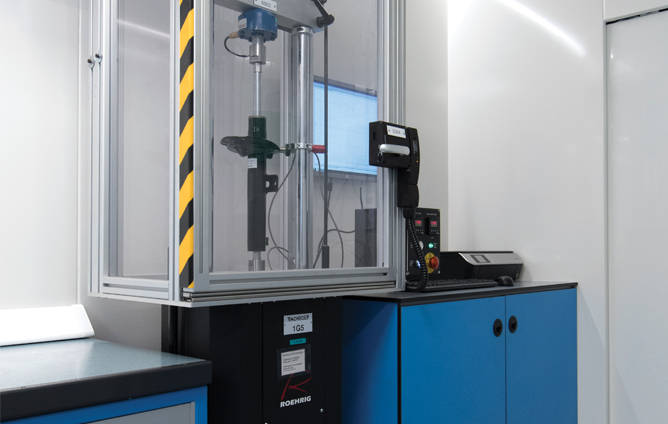 MTS enables a global damper supplier to perform trusted tests at the track, on the line and in the lab.