The Laboratory for Structural Strength Testing at Beijing Jiaotong University provides a wide variety of independent testing services, including structural tests involving railway materials and rolling stock. The laboratory was founded in 1982 as a teaching and scientific research facility for railway vehicle studies, managed under the Engineering Department of the former Northern Jiaotong University.

Over the next decade, the laboratory would become one of China’s most important experimental research bases for improving railway vehicle structural strength, managing more than RMB 50 million in fixed assets and 1000 square meters of space. The laboratory passed CMA certification in December 2006 and CNAS certification in May 2009, signifying that its testing and management structure has reached a new level of capability.

In response, the Laboratory for Structural Strength Testing needed to add capability to perform several new advanced testing capabilities. Those included the ability to verify the coupling and synchronous relation between loads, reproducing the load spectrum of powered bogies, and evaluating the impact of the load spectrum on the fatigue of bogies under high-speed operating conditions.

Rail bogies are guiding units. Therefore, their reliability strongly influences the safety of the entire vehicle. A bogie moving at a high speed on a railway is subject to several complex loads applied simultaneously, such as the main vertical loads, longitudinal braking loads, transverse loads at the primary suspension, transverse loads at the secondary suspension, roll loads, hunting loads, torsional loads and others.

In March 2008, the Laboratory for Structural Strength Testing at Beijing Jiaotong University began designing and manufacturing a testing system designed specifically for evaluating high-speed EMUs. The project was launched in close collaboration with MTS, guided by MTS’ system integration and engineering expertise.

This project was clearly a priority for the Chinese government. Within nine short months, the construction of the laboratory building, the design and layout of the oil and water pipelines, and the installation and adjustment of steel platforms, reaction frames and equipment were all completed. The next six months were spent designing, installing and fine-tuning an MTS FlexTest® controller, providing 13 loading channels to a configurable test system supporting fatigue evaluations of high-speed EMU bogie systems.

The Laboratory for Structural Strength Testing is now equipped to support testing involving multi-channel coordinated loading, along with actual line testing, laboratory loading verification and damage consistency research. This new capability opens a new chapter in the study of load spectrum in high-speed EMUs in China.

With its advanced new capabilities, the Laboratory for Structural Strength Testing at Beijing Jiaotong University has established itself as China’s premier provider of high-channel-count loading spectrum tests for high-speed EMU bogie frames under development.

This test system makes it possible to measure, simulate and evaluate increasingly complex designs in less time and for less money. Such evaluations contribute to the development of EMUs capable of carrying passengers at higher speeds and with greater fuel-efficiency, over a longer service life. These elements are critical to the viability of the rail system supporting China’s exploding economy.

“We desired equipment capable of coordinated loading and fatigue testing on bogie structures,” said Qiang Li, Director at the Beijing Jaiotong University Laboratory for Structural Strength Testing. “With the assistance of MTS, our laboratory has come to own a world-class, multi-channel load calibration testing table for high-speed multiple units." 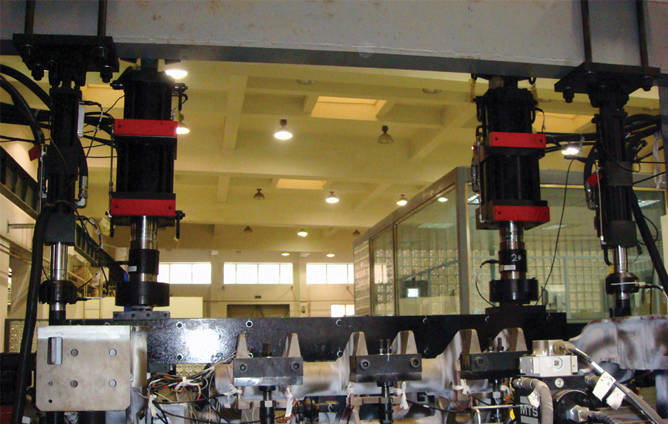