What are the most important considerations when choosing a testing system for dynamic mechanical analysis?

Dynamic Mechanical Analysis (DMA) testing is the study of the dynamic behavior of a material or component. Most often the DMA characteristics are studied as a function of varied velocity at a fixed displacement amplitude, hence as a function of varied frequency. As the excitation frequency is increased, transducer dynamic measurement accuracy can be adversely affected. High-frequency excitation can inadvertently produce mechanical resonant modes within the frame structure which will often corrupt the measurement accuracy of displacement and force transducers.

Typical frame-referenced displacement transducer measurements (either LVDT or Encoder) can be corrupted by erroneous motion at the transducer’s mounting reference base due to resonant vibrations. Force transducer measurements can be corrupted due to high acceleration induced upon a transducer due to resonant vibrations. This acceleration can result in significant inertial errors in the force measurement. There are techniques which can help reduce a transducer’s sensitivity to these unwanted vibrations, but these techniques are not without compromises. A more effective approach is to eliminate all frame mechanical resonances which may be present in the system’s operating range. With a dynamic calibration standard, a dynamic verification can confirm that your DMA measurements are not corrupted by any mechanical resonances. A good DMA system will not exhibit any detrimental mechanical resonant modes in the axis of measurement.

Most elastomers and thermoplastics have a significant amplitude non-linearity, meaning that the measured elastic modulus (or stiffness) of the material is dependent on the amplitude of the applied excitation. Different input amplitudes (displacement or force) will result in different measured stiffness or modulus. In fact the purpose of some test programs is to measure this amplitude dependency. For these tests an amplitude sweep is applied with a fixed frequency and temperature and the resulting measured modulus is reported. For many tests the varied parameter is the excitation frequency and material temperature. But since the material modulus and the materials response are so amplitude dependent, it is extremely critical that the test input excitation amplitude is known and controlled accurately. This amplitude control becomes even more difficult at higher test frequencies.

Controlling the desired dynamic amplitude is most effectively accomplished though real-time servo-control loops and often through additional outer loop compensators. It is important that these control laws have high bandwidth and are robustly stable. Low bandwidth control loops or sluggish outer loop compensators can impose additional “learning” or “convergence” cycles on the specimen and cause internal specimen heating, resulting in misleading material characteristic data. Lack of extremely stable control laws can also result in control loop instability which often damages the specimen. In summary, superior control of dynamic amplitude is a critical DMA test system attribute. 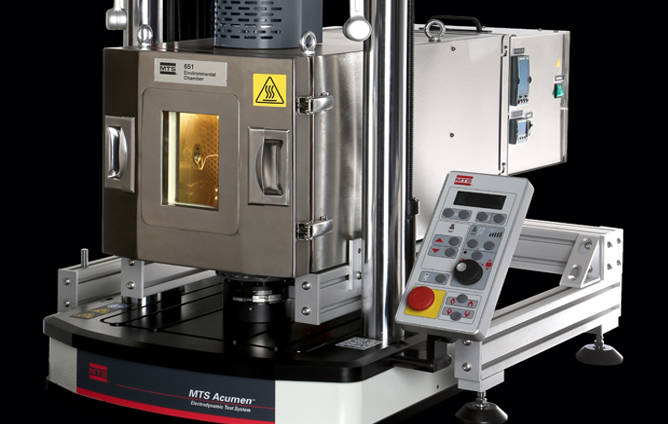