Home > Managing the Complexities of TMF

The Rolls-Royce Mechanical Testing Operations Centre (MTOC) is an innovative test lab for the Rolls-Royce Group dedicated to the mechanical and structural evaluation of gas turbine components during development, production and service. Rolls-Royce invested in this new testing facility for two reasons: to meet the urgent needs of product innovation and aftermarket support, and to combine robust mechanical, materials and vibration test capabilities within a single facility and organization.

MTOC opened in 2010 and offers a spectrum of testing capabilities, including fan-blade-off, bird ingestion, spin, fatigue, vibration and of course materials testing. The 75,000 sq. ft. facility employs 70 people and is located in Dahlewitz, near Berlin, and close to Rolls-Royce business partners and suppliers.

Thermomechanical fatigue (TMF) is one of the most important tests conducted at MTOC because it accurately represents the operating environment of certain components in the gas turbine engine, albeit in a simplified way. By undertaking TMF testing at MTOC, Rolls-Royce can tightly control the process, test new alloys and observe any unusual material behavior that arises during the test. This gives the company a better understanding of the materials used in its engines. The challenge of TMF, however, is complexity.

“Our tests are complex and require a combination of temperature to load phases, not commonly associated with standard TMF testing,” said Dr. Stephen Brookes, Test Engineer at MTOC and TMF test specialist. “TMF testing at MTOC includes both strain-controlled and load-controlled varieties. They are separate procedures of similar complexities. My role at MTOC is to ensure these test types are accurate, reliable, efficient and further developed.”

In addition, MTS TestSuite software offers a dedicated TMF module that contains all of the test, analysis and report templates and calculations required to conduct thorough and precise TMF tests. Predefined test templates can be run as they are, or can be modified to conform to most single- or multi-axial TMF tests described in ASTM and ISO draft standards.

“The MTS system is extremely well designed,” Dr. Brookes said. “Everything has been considered for the optimum test – the load frame, furnace and cooling are all integrated and controlled by the TestSuite software. This enables us to test accurately, efficiently and gives reliable repeatability.”

According to Dr. Brookes, MTS TestSuite software has proved to be extremely versatile.

“We can easily write and/or edit a test procedure to suit our needs. This capability has proved invaluable in synchronizing the load frame, furnace and cooling systems, enabling us to write complicated stress-controlled TMF procedures in which synchronization is no longer an issue.”

“We were very pleased to be able to call on MTS software developers to develop a strain-controlled TMF template procedure for us,” Dr. Brookes said. “This proved to be the most efficient way forward and despite our facility being so far from MTS, the turnaround time between our requests and the finished procedure was extremely fast.”

Dr. Brookes remains positive about the future of TMF testing and the role of MTS test systems at MTOC.

“The future of TMF testing at MTOC will extend towards greater testing complexities and further development of the technique,” Dr. Brookes said. “Combining different test types into the TMF testing, such as crack propagation TMF, is one example of increased testing complexity. On the development side, there is always room for improved practices, new test monitoring techniques and new standards. With the MTS system we have now, I see no reason for these future visions not to become reality.” 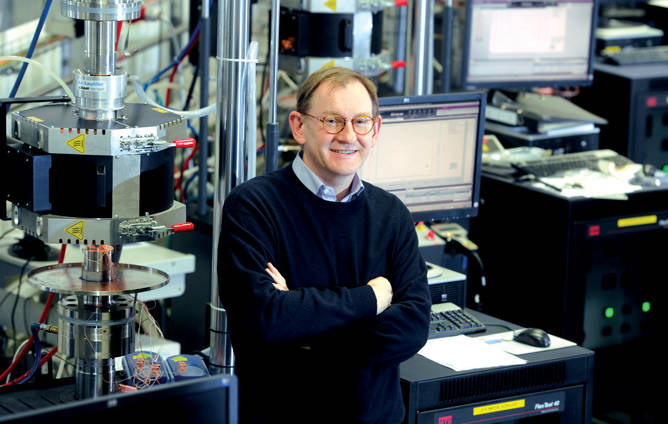