Mercer Engineering Research Center (MERC) is an independent, non-profit engineering firm affiliated with Mercer University in Warner Robins, Georgia. MERC was founded in 1987 with a charter to serve as Mercer University’s applied research arm in the areas of engineering and applied sciences. The MERC facility has developed full-service test laboratories, including a structural and materials test laboratory to be used primarily for aircraft component validation.

As a primary component of the structural and materials test lab, MERC purchased an MTS 810 servohydraulic load frame with FlexTest controls in early 2006 to meet its component testing needs. The test system supports static testing up to +/- 22 kip, dynamic testing up to +/- 20 kip at frequencies up to 20 Hz, and it is capable of handling specimens up to 51.5 inches (1.31 meters) in length.

“MTS had such a strong reputation and the MTS representative was just up the interstate from us in Atlanta,” said Gerry Ringe, a division manager at MERC. “So we went with the MTS 810 load frame, and both the system and the support have served us well.”

In the months to follow, the MERC test lab would develop a stellar reputation for its engineering excellence, and word made its way across Robins AFB. In late 2006, the Air Force approached MERC to perform select structural testing in addition to continued smaller component testing, with an immediate request to validate the design of a new center wing box joint component for use with the aging C-130 Hercules aircraft.

At the time, most aircraft structural testing was performed by the OEM at their facility north of Atlanta. However, engineers at the base sought the same responsiveness and day-to-day accessibility they already enjoyed with their component testing at MERC.

“Our contacts at Robins Air Force Base really liked the fact that we were a ten-minute drive from them, and they knew we had the space and expertise to tackle testing of this magnitude,” Ringe said. “MERC ultimately agreed to take on the work, but this created an immediate challenge for our test lab. Our MTS 810 load frame was not designed to handle testing of this magnitude, so we had to find a second load frame fast.”

Realizing he needed to seek out expertise in planning and implementing large-scale structural test systems, Ringe again turned to MTS for guidance.

“It was all very straightforward,” Ringe said. “We shared our capabilities and what we needed to do with an MTS sales representative and application engineer, and they were fast in proposing a solution for getting the highest force and capacity possible within those parameters.

“We also wanted to use the new test system for other applications in other industries, and MTS’ expertise helped to ensure we didn’t limit ourselves in any way,” Ringe added.

Ringe said that MTS went to great lengths to help MERC feel certain about its decision. “MTS provided complementary training in Minnesota for four of us, to insure that we fully understood all of the capabilities of the MTS equipment. After that, we were convinced it was going to be a great partnership, and we confidently went forward with the purchase of a second, larger, MTS test system.”

MERC purchased the MTS 311 servohydraulic load frame, paired with the FlexTest controls with which MERC lab engineers were already familiar. The MTS 311 handles static testing up to +/- 265 kip and dynamic testing up to +/- 150 kip, at frequencies up to 10 Hz. Equally important, the load frame is capable of holding test articles up to 15 feet (4.6 meters) in length, making it the ideal solution for testing massive aircraft subsystems and structures.

Center wing section testing on the MTS 311 is proceeding successfully and will be completed in the fall of 2009, and the expanded testing capabilities at MERC have already attracted other structural testing projects from the Air Force. Additionally, MERC is beginning to look beyond the Air Force — and even the aerospace industry — for potential customers.

“MTS has been an enabler for us,” Ringe said. “Our test systems sell themselves with their sheer size, capacities and capabilities. Interest in the marketplace has been significant. Possible uses are limited only by the imagination, and our test engineers are really starting to get creative.”

“The MTS equipment has been one of the best buys we’ve made, and the service and support have been outstanding,” said Dr. David Barwick, MERC’s executive director. “MTS has been instrumental in helping us leverage the resident expertise that we previously didn’t have the equipment to exploit.” 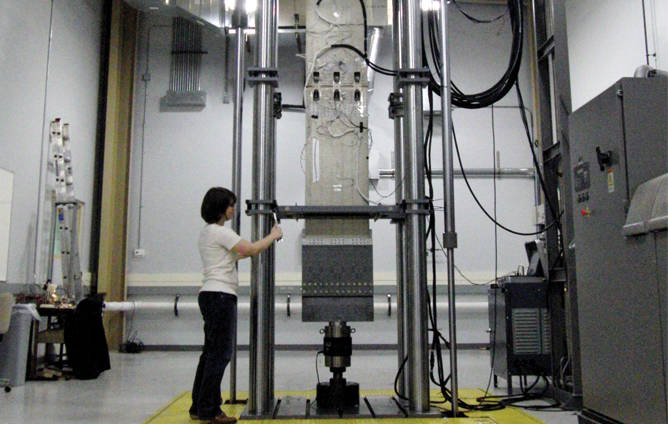