Whenever a marine vessel enters a port, a significant amount of energy gets transferred between the berthing vessel and the rigid docking structure in place to receive it. Maritime International Inc., headquartered in Broussard, Louisiana, specializes in the engineering and manufacturing of fendering systems designed to safely absorb the momentum of berthing vessels, helping to protect both docks and ships.

Maritime International works closely with Port Authorities, engineering firms, marine contractors and private operators around the world to provide fendering systems, mooring bollards and other products to meet their dockside needs. Their marine fenders range in size from one foot (31 cm) to those that stand more than 10 feet (three meters) tall and are designed to accept the largest marine vessels in service. The company serves customers in all geographies, so their products need to withstand the extremes in climate and temperature ranging from those found in the Arctic Circle to Africa.

According to Joshua Hargrave, Engineering Manager at Maritime International, this wide range of required fender sizes, force capacities and operating environments poses a significant ongoing challenge for his test lab.

“We have to test every fender against velocity, temperature and angular correction factors and we need to be able to say that a rubber body will react in a specific manner when it is hit in a certain way at a certain speed, and in a certain operating environment,” Hargrave said. “These variables ultimately create different performance characteristics for our fendering systems.”

Maritime International designed and built multiple load frames that employed third-party custom software and basic control capabilities to meet their mechanical testing needs. “The old software setup gave us very limited adaptability, and it was hard to interpret what was happening in terms of control and data acquisition during a test,” Hargrave said. “It was becoming increasingly clear that neither our software nor our controls offered the flexibility and the ease of use we needed.”

In 2008, Maritime International began researching available test software, eventually deciding to work with MTS and begin migrating to the MTS TestSuite™ software platform. “I wasn’t a software or integration expert, and it quickly became apparent that MTS understood exactly what we wanted to do and exactly what needed to be done.”

MTS TestSuite software provides a single, expandable environment, designed to make it easy to create and run tests, generate reports and conduct analysis across the test lab. Maritime International also decided to replace its controls with next-generation FlexTest® digital controllers, to ensure it was taking full advantage of the new software’s capabilities. All controllers in the FlexTest family share a common set of hardware boards and interface tools, and are easily reconfigured for a wide variety of testing applications.

“I expected a nightmare in terms of getting the MTS software and controls to work with our load frame,” Hargrave said. “But the new MTS technology was fully integrated and operational within one day, and I was running tests the next day. Everything interfaced and worked perfectly. You can’t beat that.”

For his inaugural test with MTS TestSuite software, Hargrave had to design and run a deceleration test that follows a particular curve simulating how a ship slows down when it contacts a fender. While he had set aside a whole month to create the test, it took only two days. “The design of the software matches how we go about doing things, and it is very easy to figure out and use,” Hargrave said. “Everything just makes sense.”

Hargrave found his new capabilities for real-time input and calculation of variables to be especially useful. “I basically set up 25 points to follow on the curve, and all I have to do now is enter 3 inputs and the software calculates up to 75 variables and completes the curve,” he said. “Since all variables are pre-calculated, I can now easily make changes on the fly, which is vital to the wide variety of testing we do.”

Despite being on the MTS TestSuite platform for a short period of time, Maritime International is already seeing positive results. “We’ve only had the software for eight months now, but it is clearly paying dividends for us,” Hargrave said. “Anybody could ask us to run some crazy test and I could figure out how to run it on this software.

“We work closely with engineering firms, and they routinely ask, ‘What happens if you do this and that to a fender?’ In addition to relying on our general expertise and experience, we can now say with confidence that we will run any test required and have an answer to them within a couple of days. This has been a tremendous credibility builder for us.”

Hargrave cites a recent scenario posed by an engineering partner, regarding what might happen if a fender were filled with water and hit at a certain speed. Although he couldn’t immediately supply an answer which fit the parameters given, he was able to literally put the question to the test. Underwater test results were available within two days and were then appropriately incorporated into the fendering and dock design for the project in question.

“Engineering firms depend on manufacturers for assistance like this, and the fact that we can either provide an answer on the spot or in a couple days makes us an extremely valuable partner. This ability has much to do with the fact that we can now easily modify our testing on a moment’s notice.

“I know we’ve just scratched the surface of what is capable with our new MTS technology, but it has already had a tremendous impact on how effectively we serve our customers,” Hargrave said. “We’ve already run a full range of tests in just a few months, and we’re pleased to say that the MTS solution is paying huge dividends for our clients and ourselves alike.” 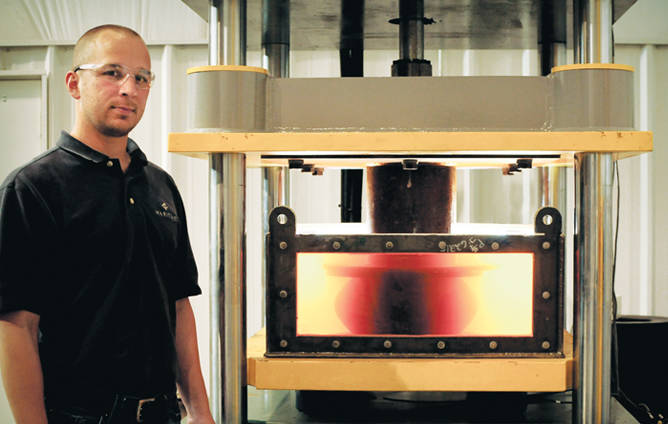