Tongji University in Shanghai, one of the oldest and most prestigious universities in China, is a leader in pursuing new testing methods to help civil engineers improve their designs. The College of Civil Engineering at Tongji University is home to both the Department of Bridge Engineering and the State Key Laboratory of Disaster Reduction in Civil Engineering. Here, Dr. Chengyu Yang is a key professor in the research division for seismic design of bridges, conducting tests that help reduce the effects of devastating earthquakes on bridges, buildings, tunnels and many other civil structures.

Among his lab’s biggest challenges is the tremendous mass and size of civil structural specimens. It is often times impractical to conduct shake table tests with full civil structures in a laboratory setting, so researchers must conduct seismic simulations on much smaller scale physical models, often 1:100 or even 1:200 scale. The problem with this approach is that the smaller the model, the less meaningful the test results. Smaller models simply do not react to dynamic seismic inputs in the same manner as larger models or full-scale structures, making it difficult to extrapolate and apply test data to the real world.

One innovative solution to this problem is to conduct shake table tests combined with structural actuators of large scale, partial physical structures and employ hybrid simulation techniques to simulate the remainder of the structure and/or mass numerically. Although the concept is not new, it had only been pursued at scales too small for meaningful seismic simulation on very large civil structures.

In 2014, Dr. Yang teamed with his peers from the University of California – Berkeley and MTS Systems Corporation to transform the idea of coupling shake tables with structural actuators for real-time hybrid simulation from concept to practical application.

Critical to achieving success was overcoming the numerous control challenges associated with integrating and synchronizing a dynamic structural actuator with a three degree-of-freedom (3DOF) shake table/real-time hybrid simulation system. According to Dr. Shawn You, MTS System Integration Engineer, these challenges were resolved through the employment of innovative system tuning techniques as well as control calculations needed to compensate for cascading, or amplified, negative damping – a very complex task that required the combined efforts and resources of University of California – Berkeley and MTS researchers and engineers.

To test their solution, the team set up a seismic test of a bridge bearing component at the Tongji University facility. The test setup comprised a 1:4 scale bridge section with a greatly reduced deck mass mounted on top of a large, 3DOF seismic simulator (shake table) and attached to a dynamic structural actuator mounted to an adjacent strong wall. This physical system was driven by a real-time hybrid simulation system, featuring a powerful MTS FlexTest® controller, a 469D controller, and virtual structure and soil/rock models, all linked together by reflective memory over an OpenFresco communications framework. As the simulation played out, close analysis of the results proved that the system had effectively employed the extra actuator to correctly apply the missing bridge deck mass, resulting in an accurate seismic simulation of the full structure.

Dr. Andreas Schellenberg, a Research Engineer at the University of California – Berkeley and Principal at ASES-Advanced Structural Engineering Solutions, who provided virtual modeling and OpenFresco expertise, lauded the success of the project,

“Up until now, achieving such precise, simultaneous control of a hybrid shake table combined with additional structural actuation had been done only on a relatively small scale. This, however, is the first time it has been realized on such a large scale. This development presents researchers with a valuable new tool for performing high-fidelity seismic simulation on larger structures, yielding far better, more realistic data. The potential applications of this testing technique are very exciting, far reaching and will foster collaboration of researchers in many fields.”

Pleased with the results of the collaboration and successful simulation, Dr. Yang feels that the new methods hold great promise for the future of seismic simulation of civil structures. “We can now test larger scale specimens to capture more realistic simulation data, and we will no longer need to build and test complete physical models of buildings – just a few floors or substructures are now enough to simulate the vibration performance of the most critical part of the whole building accurately. Implementing this new method has the potential to greatly reduce test costs, save a lot of time and increase our lab’s operational efficiency.” 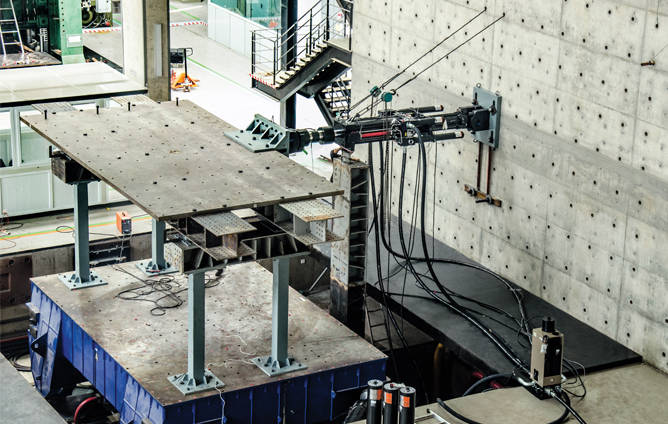 Tongji University teams with MTS and the University of California-Berkeley to transform civil hybrid simulation.