Kajima has long considered the shaking table a vital piece of testing equipment for improving earthquake resistance technology in Japan and other earthquake-prone countries. The company introduced its first MTS shake table in 1975 and replaced it in 1991 with a higher capacity one. However, this shaking table’s performance was inadequate to deal with massive and long-period earthquakes forecast for the future and considered insufficient for investigating increasing the earthquake resistance of nuclear power plants in accordance with changes to government policies.

In 2008, Kajima and MTS started to examine an update aimed at increasing the stroke and power needed for testing the earthquake resistance of skyscrapers and important structures such as nuclear power plants. Kajima selected MTS based on a proven track record of supplying large shake tables installed worldwide and the past excellent working relationship between MTS and Kajima.

For Kajima, the most important characteristics and functions for an updated large shake table were high accuracy control, increased payload and longer stroke capacity to reproduce long-period earthquakes. In order to realize these goals, MTS proposed a high-performance, three-dimensional shaking table, consisting of a 2-layer system: a “main shake stand,” which reproduces large seismic motions, and a “long-period motion stand,” which adds additional stroke capacity needed for the reactions of skyscrapers and other long-period structures.

Although the aim was to create a new cutting-edge, multifunctional and high-precision shaking table, the existing buildings and the floating foundation from the 1991shaking table were re-used out of concern for the environment. The floating foundation of the new shake table was constructed atop base components, pneumatic springs and dampers from the previous model. Constructing the foundation in this way reduced vibrations transmitted beyond the site and lowered the impact on the surrounding environment.

Construction was completed in 2010, the “W-DECKER®” is the world’s most functional large-scale privately owned shaking table and is capable of reproducing nearly every major recorded earthquake, including the Great Tohoku Earthquake of March 11, 2011.

The “long-period motion stand” was used to reproduce and examine the large oscillations of skyscrapers that took place in metropolitan areas far from the seismic center after 3/11. Furthermore, because a great deal of damage occurred in nonstructural elements such as damage to ceilings even when building structures remained intact, the “main shake stand” was used to clarify the mechanisms of ceiling collapse and examine the effects of earthquake resistance measures.

“Until now, the world has not had long-period earthquake motion test equipment but the ‘W-DECKER’ has enabled oscillation of the upper floors of skyscrapers during long-period earthquakes to be reproduced simply by entering them,” states Jun Tagami, a senior researcher. “The MTS North America and MTS Japan teams came together and provided excellent support. Operating rates continue to exceed 100% and our testing contract schedule is nearly full for the next year.”

MTS offers a regular maintenance plan in order to ensure the uptime of the equipment. Eliminating unexpected downtime and keeping the equipment in prime operating condition allows more accurate test results to be obtained.

“Up to now, earthquake countermeasures were established by learning from damage that had already occurred and then feeding this back to the design of new buildings. Although a long-period earthquake that causes extensive damage to a metropolitan area has yet to occur, there is a demand for countermeasures to be devised as early as possible. We aim to use the ‘W-DECKER’ to further improve earthquake countermeasure technologies, such as earthquake proofing, vibration control, and seismic isolation, and respond to our customers’ constantly evolving and developing needs.” (Jun Tagami) 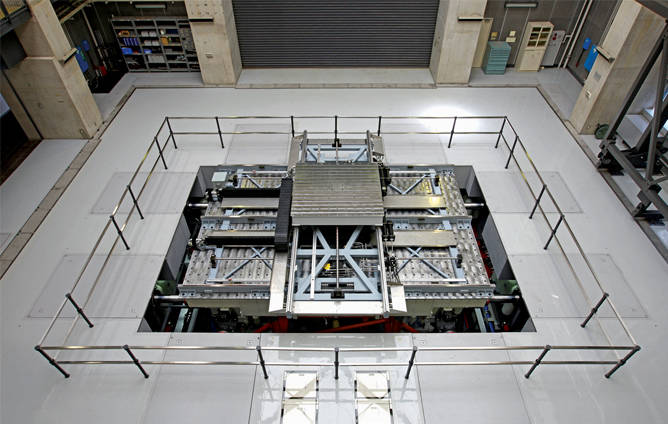