Seismic activity occurs to some degree every day in the southwestern U.S., especially California. To protect people and property, strict laws are in place to ensure that all equipment used in public facilities will withstand the forces of a major earthquake.

Consequently, demand has steadily risen for OSHPD certification testing services, and the demand has drifted well beyond California state lines. OSHPD provisions are now part of the International Building Code adopted by many U.S. states. They are also being used in China and Japan.

Dr. Laplace, a structural engineer who has managed UNR’s Large Scale Structures Laboratory for 11 years, knew that generating the necessary seismic motions for OSHPD certification would be a primary challenge for the new facility. These motions prescribe severe and complex displacement, velocity and acceleration response spectra from which a motion time history must be generated. Adding another layer of complexity, the spectra must be matched within extremely tight bounds.

Dr. Laplace also recognized another reality for this type of testing: you only get one chance to get it right.

“Clients ship one test article for OSHPD certification, which are often unfit for use after being subjected to a simulated earthquake,” Dr. Laplace said. “So if the test isn’t performed correctly, it’s back to square one and both the test lab and the client are out lots of time and money. I couldn’t overstress the importance of specifying the best test technology available for this new certification lab. From my decades of seismic testing experience, I knew we had to work with MTS.”

In May 2010, the 7,500-square-foot Dynamic Certification Laboratory (DCL) officially opened for business, with Dr. Laplace serving on its Board of Directors. The MTS 353.20 Multiaxial Simulation Table (MAST™) was selected as an off-the-shelf test system from the standard MTS offering, so that the lab could begin running certification tests as quickly as possible.

Although the MAST system is primarily used for automotive vibration testing, MTS and DCL staff determined that it is also ideally suited for OSHPD certification testing. “MTS really got creative here, which is something I’ve grown to value during my history of working with this company,” Laplace said. “Instead of confining their search to their seismic test solutions offering, MTS engineers took a step back, listened carefully to what we were trying to achieve, and found the best possible solution, albeit from a surprising place.”

“The simplicity, reliably and turnkey nature of the MTS test system allowed DCL to focus immediately on the testing, which helped us get off to the strong start we needed,” Laplace said. “The system performs exactly as specified, and operators were running qualification tests the minute we turned them loose. Our first OSHPD certification was completed just a few weeks after the MTS MAST system was commissioned. Pretty amazing.”

According to Dr. Laplace, partnering with MTS played an integral role in making DCL such a success from the very beginning.

“We had a specific and difficult requirement but didn’t have the expertise to realize it, and MTS fulfilled that need perfectly through its technology and service,” Laplace said. “The MAST system and supporting technology make it simple to generate the specific seismic qualification motions needed, with superior data acquisition tools to give us confidence in the test results. We are truly a one-stop shop for OSHPD certification testing.”

Laplace says that as seismic compliance requirements continue to evolve, DCL will leverage the adaptability of MTS hardware and software to keep pace. “The MAST system is the first of hopefully several stages of growth for DCL. If in the future DCL requires a second MAST table, MTS has the knowledge and capabilities to seamlessly link the two systems together and operate them as one. This may prove useful for running OSHPD certification tests on larger, more spatially distributed equipment.

“The bottom line is that the infrastructure is already in place, and making modifications will be relatively affordable and easy to do,” Laplace said. “DCL is already phenomenally busy this early on, so there is already talk about possibilities for expansion. The current MTS infrastructure serves as a perfect foundation for wherever we decide to go next.” 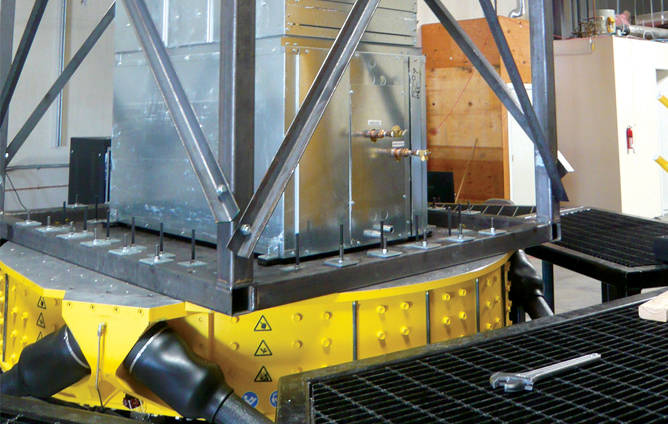