Bone cements play a crucial role in vertebral augmentation. During this minimally invasive surgical procedure, surgeons inject a bonding agent into spinal column fracture sites as a means of easing pain, improving spinal stability and, in some cases, restoring height. With the rise in osteoporosis-related fractures from an increasing elderly population, global demand for bone cements has never been higher.

In recent years, concerns have arisen regarding the performance of PMMA-based bone cements for vertebral augmentation. PMMA cements are very stiff – perhaps too stiff – and have been linked to adjacent vertebral fractures in patients. In addition, some of the fluid components used for curing are toxic, and the curing process produces elevated temperatures, which can damage surrounding tissue. Calcium phosphate (CaP) has been explored as an alternative material, due to its non-toxicity and natural reabsorption into the body. CaP is a brittle material, however, and can shatter when exposed to the flexural and shear forces naturally exerted on the spine.

Neither formulation is satisfactory to the Applied Materials Science team at Uppsala University in Uppsala, Sweden, part of the university’s Department of Engineering Sciences. The team of 20 manages a variety of biomaterials studies, and is currently focusing some of its efforts on research related to bone cements.

“Our ultimate research objective is to identify new types of cement that offer the strength of PMMA and the non-toxicity of calcium phosphate, but without the shortcomings of either,” said Dr. Cecilia Persson, Project Manager and Student Supervisor for the Uppsala University Applied Materials Science team. “Spinal motions are difficult to replicate in the test lab, and our main challenge involves realism. We are currently evaluating cements mainly under quasi-static compression, but we also want to characterize how a formulation will perform over the long term.”

“I used MTS test equipment earlier in my career and found it to be accurate and dependable, so I considered it a valid option for Uppsala University,” Persson said. “We knew many millions of cycles would be required to thoroughly evaluate any viable formulation, so test system reliability and repeatability were key in our decision to go with MTS. We have been pleased with both the reliability of our test system and the level of technical support we receive from MTS.”

Combined with an MTS Bionix EnviroBath environmental simulation system, the MTS Bionix solution allows the Applied Materials Science team to simultaneously apply loads to a bone cement in a saline bath held to constant human body temperature. The end result is precise simulation of the forces and conditions any cement must ultimately undergo in a patient, long after vertebral augmentation surgery is complete.

“The MTS system permits the evaluation of cement properties over time, simulating the loads a person is subjected to over a period of several years,” Persson said. “The MTS system will also permit more elaborate testing in the future, as it is very flexible.”

“We’re confident that we are achieving an accurate snapshot into how a bone cement will actually perform in an actual person living an active life,” she said. “Our test setup is also quite flexible, so we have freedom to get creative and explore possibilities in multiple directions. We have made considerable progress over the last few months, and the MTS hardware, software and support has played a significant role in our accomplishments.”

Persson admits that although her team still has much work ahead in finding the next vertebral augmentation bone cement, she feels well positioned to ultimately achieve this goal.

“There is lots of ground to be covered from a research perspective,” Persson said. “But we are getting closer to a viable solution every day, and I feel we have the resources, technology and expertise it takes for us to get there as quickly and efficiently as possible.” 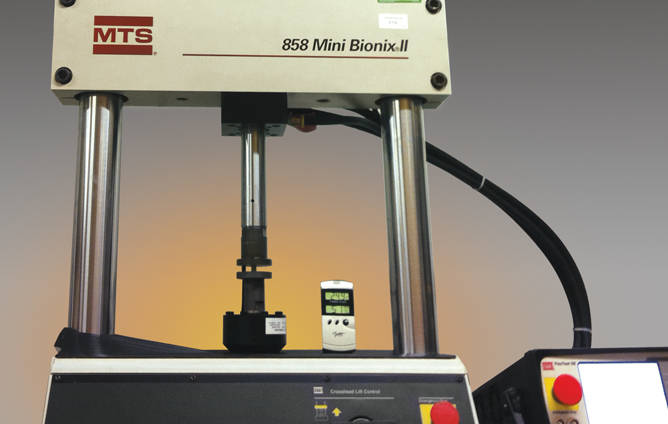