Stealth Composites, a subsidiary of Chattanooga, Tennessee-based Fillauer Companies, produces lower-extremity prosthetic devices for customers around the world. Demand for such devices has steadily climbed due to a dramatic increase in the incidence of diabetes and an aging, heavier population.

Stealth Composites sought to introduce a cutting-edge prosthetic foot to the marketplace. Ideally, this foot would deliver a realistic transfer of weight from the toes to the heel, a phenomenon known as “rollover,” along with utmost reliability over a long, functional life.

“Having a highly functional foot that is also durable has been a longstanding challenge for prosthetic foot developers,” said Eric Rubie, president of Stealth Composites. “But we realized that as a new entrant to a highly competitive market, this is exactly what we needed to create.”

To accelerate development and ensure that its product was indeed both flexible and durable, Stealth Composites sought to thoroughly evaluate the fatigue life of its prototype at the earliest possible stage of development, which would allow them to more efficiently accommodate design changes.

Historically, prosthetic foot manufacturer have tested exclusively to the ISO 10328 standard, which sets overall guidelines for all lower-limb prostheses. However, companies found that product failures experienced in use did not correlate well with the results from ISO 10328-based laboratory testing. Since testing per ISO 10328 alone was not sufficient to predict field failures, quality-focused developers were forced to rely heavily on field-testing of prototypes on human volunteers. In addition to being expensive and non-repeatable, this mode of design validation can result in significant time-to-market delays—up to six months in many cases.

This situation led ultimately to the identification of weaknesses in the ankle-foot structural test methods described in section 17.2 of ISO 10328:2006, and the subsequent development of more advanced test procedures, later articulated in ISO 22675. These new procedures more accurately simulate loading rates in synchronization with the motion profile, and as a result, have been found to better replicate failures (or performance) experienced in the field.

Rubie knew that testing to the ISO 22675 standard would help his company produce a market-leading prosthetic foot faster, but meeting the mechanical requirements of the rigorous, new standard presented problems. “There were very few test systems on the market that were capable of determining ISO 22675 compliance, and we didn’t have the time or expertise to develop one in-house,” Rubie said. “So, we started looking for an outside partner. In the end, MTS was the clear choice — nobody matches their expertise, especially when it comes to custom development.”

MTS worked closely with Stealth Composites to develop a test system that realistically reproduces the loads and moments of walking, delivering highly accurate and consistent test profiles for determining ISO 22675 compliance. This system is now available as the Bionix® Prosthetic Ankle-Foot Testing System.

With the new test system developed in conjunction with Stealth Composites, the foot prosthesis is attached to a tube adaptor (pylon), and force is loaded through the knee and synchronized with an angle-controlled ankle tilt table for a highly realistic simulation of walking. The range of realistic, synchronized loading levels required by ISO 22675 can be used to generate test profiles that are highly predictive of prosthetic foot performance and durability, especially when compared to the more basic testing requirements in section 17.2 of ISO 10328.

According to Rubie, the MTS ankle-foot test system allowed Stealth Composites to produce a prosthetic foot with dynamic response that exceeds patient expectations for both performance and wear. That includes a highly realistic rollover sensation when walking.

The company is confident in its ability to compete with others in the marketplace. “The test system provides us with the ability to know we are testing each prototype thoroughly, realistically, and in a highly repeatable manner,” Rubie said. “You simply don’t get that when relying only on the ISO 10328 standard and patient trials to evaluate durability.”

“We can now perform accelerated fatigue tests without having to rely so much on long-term patient trials,” Rubie said. “When we combine the speed and accuracy of our mechanical testing with the functional feedback from patients, we are able to evaluate prototypes much faster and launch better products sooner. Our partnership with MTS was instrumental in making this possible.” 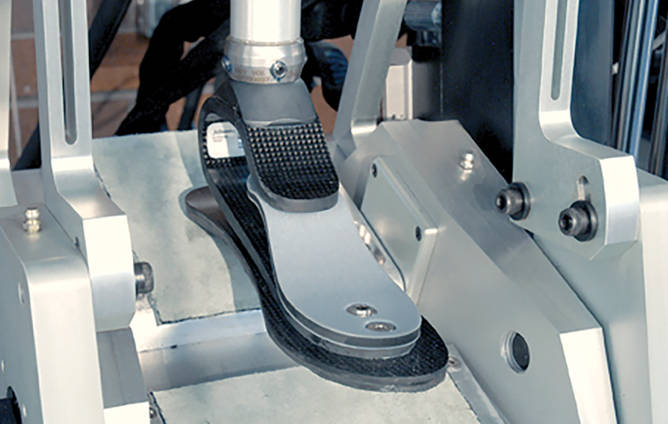