More than 200 different vehicle-related tests can be conducted within this single test facility.

After operating for several years as a proprietary test lab focused on the needs of the Toyota Formula 1 program alone, TMG began to recognize the tremendous potential value that its test facility held for the broader vehicle development community. In 2009, TMG officially decided to make its test capabilities and resident expertise available for hire to external customers.

“This is a unique facility with so many advanced systems working together to offer superior testing speed, accuracy and depth of information throughout the development cycle,” said Marco Gehlen, Group Leader of Full Vehicle And Component Testing at TMG. “But to successfully become a contract test lab, we knew we had to gain greater flexibility from our existing test systems to support vehicle developers and suppliers beyond Formula 1.”

Instead of spending time and money procuring new test systems, Gehlen and his team sought to expand the versatility of TMG’s existing test systems through software and hardware modifications. “MTS was instrumental in the successful establishment of our original test facility, so we knew they were also the obvious choice for helping us transition to a contract test lab,” Gehlen said. “The MTS technical team already knew our technology, our facility and our people, which allowed us to avoid steep learning curves and become productive immediately.”

Over a period of several weeks over the winter of 2009-2010, TMG and MTS worked closely to complete several technology modifications across the facility. One key modification was the addition of a stepdown gearbox to its custom transmission testing system, which facilitates accurate evaluations in the test lab by replicating the forces, pressures and operating temperatures present in a gearbox service environment.

Another TMG offering that should interest motorsports and passenger vehicle developers is a live link capability, available through its in-house MTS 7-poster tire-coupled road simulator. The technology enables a secure, real-time online connection between the test lab and the racetrack, using two identical vehicle prototypes. Through this connection, adjustments can be made between the test lab and test track, literally up to race time.

“We are constantly seeking the best ways to correlate the virtual lab with reality and also with the test rigs, and our live link technology is the perfect example,” Gehlen said. “Live link has obvious time- and money-saving benefits for all types of vehicle developers, whether they’re working against an upcoming race time or a time-to-market deadline.”

TMG has maintained a busy production schedule in its first year of operation as a contract test lab. Dozens of clients have booked time at the test facility, including motorsports teams, automotive developers, component suppliers, even a few customers with needs outside vehicle-related testing. “Our clients are pleased with how quickly and accurately they can complete their tests with the support of our facility and staff,” Gehlen said. “They especially appreciate the flexibility and one-stop convenience of the services we provide.”

Within the TMG facility, automotive developers can take advantage of rapid prototyping, complete machine tooling, full-scale and partial-scale rolling road capabilities, and advanced driveline, steering and component testing. All of this functionality is integrated to produce superior test data and help get better designs to market faster and for less money.

According to Gehlen, MTS has been essential to TMG’s smooth transition from OEM test lab to contract test facility. “Two MTS engineers have been onsite at TMG beginning at the earliest stages of our Formula 1 program, and they have been a major contributor to our company ever since. Without exception, MTS has demonstrated its ability to intimately understand our objectives and identify the best solutions to help us meet them.

“TMG now has the right technology, the right expertise and the right test solutions partner to take our place among the world’s most advanced automotive contract testing facilities,” Gehlen said. “Now it’s simply a matter of getting the word out, because we have something here of tremendous value to a wide variety of automotive developers.” 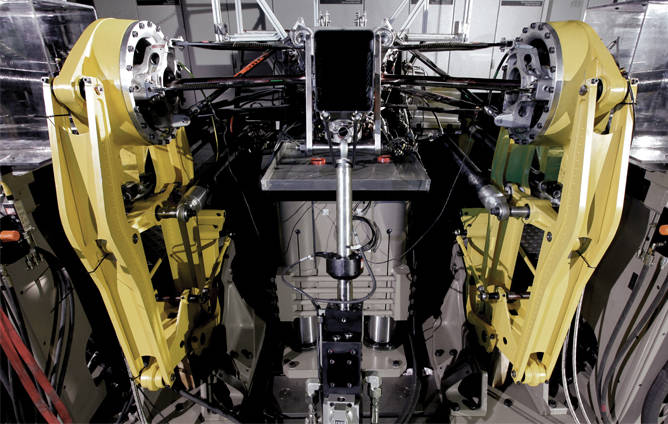