Over the last 50 years, Polaris® has become a household name for its high-performance snowmobiles, all-terrain vehicles (ATVs), utility vehicles and motorcycles. To maintain the strong brand equity of Victory® Motorcycles among cruiser bike aficionados, product developers at Medina, Minnesota-based Polaris Industries recognized the need to bring new Victory models to market more often. Unveiling a new product every two or three years simply offered too much opportunity for competitors to fill the void in the marketplace.

Further complicating matters, these shorter development times had to occur while preserving the superior performance and attractive pricing that have made Victory bikes darlings with consumers and the media over the last several years.

Polaris has historically conducted most of its Victory prototype design validation on a test track. This involves attaching various sensors to the motorcycle in development, and hiring several riders to log thousands of miles in the full range of operating conditions. Engineers then analyze collected data to characterize prototype durability and identify any mechanical systems in need of improvement.

The process often takes several months to complete. In addition to being time-consuming and expensive, track testing is inherently less repeatable due to rider habits, weather changes, and other variables, limiting the integrity of data gathered.

John Callahan, Polaris Engineering Director, joined the company in 2001 with a clear idea of how to achieve shorter development cycles, higher product quality, and lower development costs with Victory. Callahan’s previous work in commercial truck development gave him hands-on experience using MTS testing technology, and he saw this same technology as a perfect fit for Polaris.

“Earlier in my career, I saw firsthand how the MTS equipment helped us achieve far higher testing speed and accuracy by moving our testing off the test track and into the test lab,” Callahan said. “MTS test systems are capable of applying the same mechanical forces and motions to prototypes that they undergo on the proving ground, only in a much faster, more controlled and more repeatable manner. I was confident MTS could help us achieve similar results.”

MTS helped Polaris integrate the MTS Model 320 2-Post Test System at its facility in Wyoming, Minnesota. The MTS Model 320 system is a tire-coupled simulator that leverages MTS’ industry-leading RPC® software to reproduce the desired vertical spindle motion. This results in loads and moments in the motorcycle chassis that closely resemble conditions on the proving ground.

What’s more, the laboratory simulation significantly reduces the time to generate the same amount of damage compared to on-track testing.

“We can now get a Victory motorcycle test done in 19 days as opposed to six months, and we’re bringing a new model to market at least once per year,” Callahan said.

According to Callahan, Polaris has also benefited from MTS’ commitment to customer support, including close collaboration with an MTS technician to help maintain the system. “MTS is available when we need them, and we’ve had very little downtime because our technician is diligent about keeping up with the necessary routine maintenance.”

Since adding the MTS Model 320 2-Post Test System to its Wyoming, Minnesota facility, Polaris has moved virtually all of its Victory durability testing into the lab. “We would not be able to keep our product development cycles where they are without this equipment,” Callahan said. “We’ve significantly raised the bar for speed, quality, and efficiency, and the MTS test system is a must-have for us to continue competing at such a high level.”

Besides efficiency, Callahan said Polaris has benefited from the depth of knowledge they glean from the MTS test system. Knowing more about how the motorcycle chassis will react to road stresses earlier in the design process ultimately leads to better bikes reaching the marketplace.

“This additional insight has led to the development of the Victory Vision™, our top-of-the-line touring motorcycle that is our most complex introduction to date,” Callahan said. “Because we know how to test the product so well on the MTS test system, our quality is really first in the industry, and we’re hearing this positive feedback from both critics and customers.”

Because of the positive results achieved with MTS technology on Victory motorcycles, Polaris is now using MTS technology for durability and performance testing on other product lines. That includes the use of an MTS Model 329 spindle-coupled road simulator for testing Polaris ATVs.

“MTS has been very versatile and has demonstrated its ability to grow as we’ve grown,” Callahan said. “We look forward to reaching more product milestones in partnership with MTS in the future.” 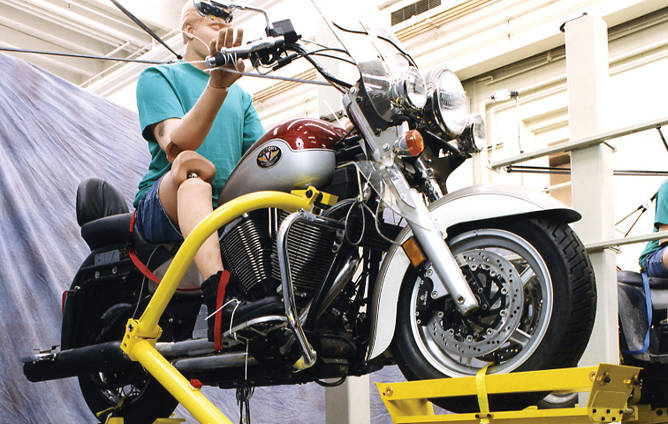