Based in Hyogo, Japan, KOBELCO Research Institute, Inc., is one of Japan’s largest and most reputable contract test facilities. More than 1,000 employees serve clients in the fields of structural testing, material analysis and computer simulation.

KOBELCO Research Institute has developed a particularly strong reputation in the automotive industry. Vehicle technology has progressed significantly in recent years, which has prompted the development of rigorous new standards for vehicle safety and ride quality. More vehicles are also being developed with lightweight, new-generation hybrid materials to meet market demand for fuel efficiency. This is requiring new tests and technologies to be developed for evaluating relatively unknown materials.

To keep pace with the changing needs of their automotive clients, KOBELCO leaders recognized they needed to greatly expand their facility’s vehicle testing capabilities.

“Because our material and component testing services have been so highly regarded, there have been many requests from our clients for us to perform full-vehicle testing as well,” said Mr. Minoru Kato, Ph.D., Senior Chief Engineer of the Engineering Mechanics Division for KOBELCO Research Institute. “This capability would help them get more accurate material or component performance assessments, and at an earlier stage of development.

“We were interested in expanding our capabilities in this manner, but we knew that such a significant expansion in scope would require the assistance of an experienced and trusted technology provider,” added Mr. Kato. “That is why we chose to work with MTS.”

In May 2008, MTS helped KOBELCO Research Institute integrate the MTS Model 320 Tire-Coupled Road Simulator into its operations. It is the first such “four-poster” system available from a contract test lab anywhere in Japan. The test system is run using powerful MTS RPC Pro® simulation and analysis software and flexible MTS FlexTest® controls.

By applying vertical forces through the tire of the vehicle, the MTS Model 320 Test System makes it possible to provide actuator displacements in the test lab that are nearly identical to the profile of the original road surface. Meaningful durability tests can be conducted before road load data becomes available and while vehicle changes are still in process, giving product developers agility to respond to necessary design changes.

Since it uses the same MTS testing equipment and analysis software as most of the world’s vehicle manufacturers, KOBELCO Research Institute can now offer superior compatibility and versatility, along with highly reliable test results. The implementation of the MTS Model 320 test system received considerable praise, and more importantly, produced referrals and new clients.

KOBELCO Research Institute is also leveraging its resident computer-aided engineering (CAE) expertise to develop technology that simulates fractures and failures prior to testing. This technology will add even more speed and significance to tests run on the MTS Model 320 test system.

Equipped with its full-vehicle testing capabilities and backed by MTS, KOBELCO Research Institute is now looking to expand into other sectors of the transportation industry.

“Many companies are currently cutting costs on test engineers and test equipment, and we do not think there will be sufficient resources to cover all the development in the near future when the global economy picks up,” Mr. Kato said. “By combining our in-house capabilities with the technology and support of MTS, we will be in an excellent position to serve customers in both domestic and foreign markets.” 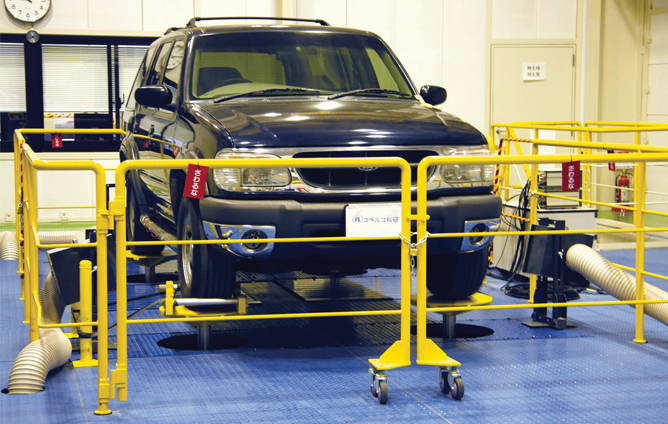