Constant pressure to accelerate vehicle durability testing is a fact of life for automotive manufacturers. For a global company such as Jaguar Land Rover, keeping pace with aggressive development schedules can prove especially challenging due to the need to carry out correlation in numerous markets worldwide.

It can’t be assumed that established durability sequences are valid for all markets served, so Jaguar Land Rover must send vehicles all over the world to collect market specific road load data and determine how well sequences correlate with actual, local service conditions. Approaching this task with conventional tools – instrumented prototype on a test track – is highly inefficient; at some point, the company would run out of time and resources.

What was really needed was a bridge between the two extremes of putting a completed prototype on a real track and running a comprehensive virtual model on a digital track. Ultimately, an innovative hybrid simulation technique pioneered by MTS Systems Corporation would serve as that bridge.

Hybrid System Response Convergence (HSRC) is an iterative technique developed by MTS that makes hybrid simulation practical for complex applications such as durability testing. Essentially, it combines a real vehicle (or vehicle subsystem) with virtual tires and road surfaces to create an accurate dynamic simulation without the need for a prototype, a proving ground or a comprehensive digital model. Where it differs from most hybrid simulation techniques is that it does not require the system components to be operated in real time. As a result, HSRC works with standard test systems and existing vehicle models.

From even initial discussions with MTS, it was clear that use of the HSRC technique would yield substantial efficiencies for Jaguar Land Rover. The ability to generate accurate road loads without having to drive an instrumented prototype over a proving ground would mean the difference between months of work and simply installing a standard vehicle on a test rig.

Jaguar Land Rover and MTS first had to determine whether the HSRC technique would work with the test systems, digital roads, tire models and modeling environment that Jaguar Land Rover was already using. When this was confirmed, the two teams worked together on an HSRC pilot project involving an MTS 329 6DOF Road Simulator with horizontal CG restraints. The test vehicle was a Range Rover Sport, and the virtual components included Jaguar Land Rover road profiles from select proving grounds, an FTire™ dynamic durability tire model and HSRC modeling and control software tools from MTS.

Using the HSRC toolset, Jaguar Land Rover combined the simulator-mounted vehicle with the FTire model, which was then “driven” over the digital, three-dimensional proving ground to simulate braking and maneuvering events. Sequential iterations of this process yielded a set of test drive files that were then compared against actual road load data from the same vehicle collected in the field. Where direct comparison was possible, the correlation between the HSRC results and the actual road measurements were considered by Jaguar Land Rover to be very good; almost too good, in fact, as several teams within Jaguar Land Rover were skeptical of the close match and required confirmation that the two data sets were developed independently.

The successful pilot set the stage for further development of the HSRC technique at Jaguar Land Rover. HSRC had demonstrated the potential to become a core road load development tool, which could replace some of the expensive and time-consuming proving ground work that still comprised a part of each vehicle’s cycle plan.

One example is how the technique could also be employed in the early phases of prototyping to help integrate many of the active control systems now standard on new vehicles. Active systems require a considerable amount of tuning, which often is not finalized in time for road load data acquisition. The HSRC technique could provide a means for Jaguar Land Rover to perform a portion of this tuning in the lab instead of on the track. Additionally, as active systems proceed through development they change the requirements for the test profile, which means the durability test loads need to be adjusted; HSRC could be employed to accomplish that in the lab, as well.

Whether used for CAE correlation, road load data development, active system tuning or other applications, the HSRC technique promises to yield very real benefits for Jaguar Land Rover. The ability to determine a specific vehicle’s response to scanned roadway surfaces from around the world will prove especially valuable to this global company in its ongoing efforts to accelerate vehicle durability testing and enhance its competitive position worldwide. 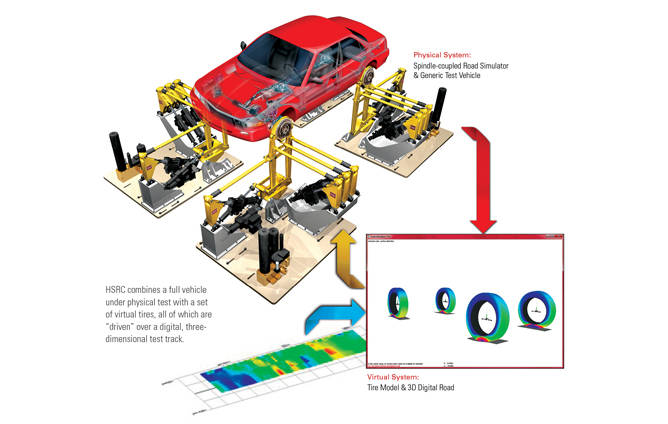 HSRC combines a full vehicle under physical test with a set of virtual tires, all of which are “driven” over a digital, three dimensional test track.