Formula 1 test engineers face some of the most demanding test challenges in the world. First, during the race season, time to create and complete tests is extremely limited between events, so every second counts in the test lab as much as on the track. Second, there are no spare parts to use as test specimens because the components being tested will be used in the car during the next race. Both of these realities elevate the importance of testing efficiency and accuracy.

For the U.K.-based Caterham F1 Team that debuted in 2010, conducting fast, flexible mechanical testing from the outset has been essential to the team’s success thus far. In just two short seasons, Caterham F1 has earned its place among the world’s best Formula 1 teams.

Caterham F1 Team had to quickly build an advanced test lab from the ground up. According to Rig Test Team Leader Matt Hill, their testing expertise was abundant, but he knew time would be in constant short supply.

“Formula 1 test labs are under continuous pressure to achieve the highest standards in the least amount of time, and we knew there would be no quiet periods,” Hill said. “During the season, we are directly involved in turning the car around from event to event. We often have to go from creating a test from scratch to turning over the results within a week, or even a few days.”

Every component that goes into a car is an ongoing candidate for design improvement, and Hill knew his team would be frequently tasked with developing new types of tests that are virtually impossible to prepare for or predict. “We knew we needed to be agile enough to test anything that comes our way, but we couldn’t afford to lose accuracy or productivity from this flexibility,” Hill said. “From my history in mechanical testing, I knew who our test solutions partner needed to be.”

When the time came to select test systems for the brand-new Caterham F1 Team test lab, Hill chose MTS. He was already familiar with MTS controllers and load frames, having worked with them for a number of years earlier in his career. He was confident that MTS hardware would deliver the speed, accuracy and flexibility his test team needed to enable his Formula 1 team’s ongoing quest to be better.

On the software side, however, Hill had some initial hesitation. He had previously managed a test lab equipped with MTS solutions that ran on MTS MultiPurpose TestWare® (MPT™) software. Because Hill was so familiar with MPT, transitioning to the new MTS TestSuite™ software was not an easy decision

Hill finds the software’s advanced variables calculation capabilities especially useful. “I think that the variables are a great strength of the software, because the if/then statements we add give us tremendous flexibility to try new things and get creative,” he said. “We even get the software to calculate all the rates for us from springs and the other different parts we characterize. This is actually quite simple, but it saves us so much time when compared with other control software.”

According to Hill, MTS TestSuite also introduces new levels of automation that greatly reduces the need for operator intervention.

“We can now write tests that prompt the user for some input, and then the operator just installs the specimen, presses ‘play’ and the software takes over and does all the thinking,” Hill said. “When you have numerous carbon components to turn around immediately, for example, you can’t afford to put in the wrong loads or introduce human error, and these variables prevent that from happening.”

For Hill’s team, MTS TestSuite software provides a clear competitive advantage in the high-pressure, fast-turnaround environment that defines Formula 1 testing. “I didn’t realize how much software technology had advanced,” he said. “We are now running MTS TestSuite software on almost all of our tests, which is improving our speed both in the lab and on race day.”

Hill cites MTS expertise and ongoing consultation as another key competitive advantage for his team. “We have a strong relationship with the people at MTS, and they are always there when we need them,” he said. “However, since the MTS solutions are so powerful and flexible, we have the tools we need to do most of the work ourselves.

“At the end of the day, the test has to be right, the equipment has to be reliable, and we have to turn things around quickly,” Hill added. “With MTS, that is exactly what we are able to do.” 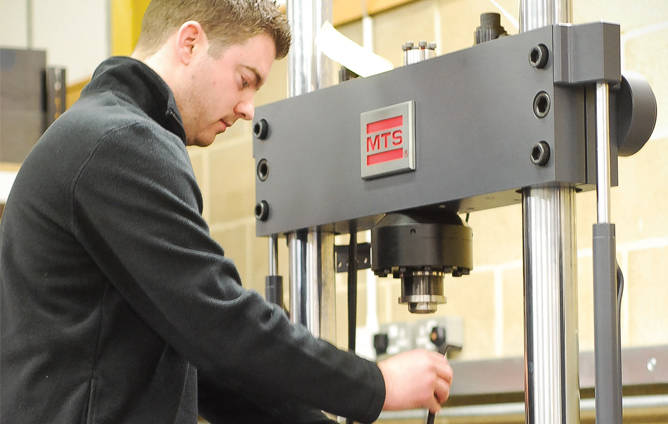