The National Institute for Aviation Research (NIAR) at Wichita State University is the largest university aviation research and development institution in the U.S. Within four locations, it encompasses 320,000 square feet, and has more than a dozen laboratories, all devoted to advancing technology for general, commercial and military aircraft.

“Clients choose NIAR because we have an experienced workforce and state-of-the-art equipment,” said Dr. Waruna Seneviratne, a technical director at NIAR and lead scientist in the aircraft airworthiness and sustainment research program. “We have experience in many sectors. We consult on everything from material selection and allowable tests to full-scale certification test and teardown inspections. It’s a full service support system.”

NIAR uses its expertise to solve some of the most difficult problems in aerospace. One of these is how much longer first-generation composite components will last, now that they are reaching the end of their certified service lives. Meaningful insight into the fracture mechanics of composite structures is elusive, as these components lack the decades of operational data and research that can be readily accessed for metallic components. As a result, pursuing the life extension of composite structures can’t be accomplished through existing methodologies. Case in point: the F/A-18 Hornet.

“The F/A-18 was designed in the 1970s, but its replacement, the F-35, will not be ready for the U.S. Navy until 2019,” Seneviratne said. “The Navy has a large number of F/A-18s approaching retirement, and wants to safely prolong the service life of these composite structures. However, it’s unknown how well these aging structures will tolerate such extended service. That’s what our research was designed to explore.”

The F/A-18 Hornet’s wing structure consists of composite wing skins and composite-to- titanium bonded joints at the wing root – the heavily loaded area where the wing attaches to the fuselage. The research initially focused on evaluating 25-inch-long dog-bone specimens extracted from the wing skins of decommissioned F/A-18s. Cyclic testing with spectrum loading replicated actual operating loads, so the team could compare each specimen’s residual strength and fatigue life data to the original certification data, as well as determine the remaining life of the joint.

“We found that the composite-to-titanium bonded joints had a much longer life than anyone thought,” said Seneviratne. “The service history had no significant effect on each joint’s residual strength. The joints typically had more than five additional fatigue lifetimes remaining under a tension-dominant fatigue spectrum, and several survived ten lifetimes without significant strength degradation.”

These conclusions led to more extensive full-scale structural testing of the inner-wing, which consists of composite skins. The test article comprised an F/A-18 center fuselage, inner-wings and trailing-edge flaps. During the first phase of testing, the wing structure was cycled for an additional lifetime of test loads while being monitored for fatigue-induced damage. A second testing phase simulated different kinds of damage during continued fatigue cycling to assess damage containment and the rate of growth, if any.

The most important outcome of NIAR’s research is that the U.S. Navy now has the necessary data to support the life extensionefforts for F/A-18s with a far greater degree of confidence, especially when it comes to advanced composite construction of the inner wing. The Navy and other branches of the armed forces can apply this methodology to other aging platforms.

“By identifying potential issues in a controlled lab environment, we can reduce the risk of unexpected phenomena that can jeopardize an entire fleet’s safety,” Seneviratne said. “The data from our work will also help inform and improve new designs of composite aircraft components and structures.”

The use of MTS test solutions helped Seneviratne’s team to complete this research safely and efficiently. The response of the actuators and the digital control systems served to protect both expensive test articles and test operators alike. The agility of MTS servovalves, combined with independent pressure control and other safety features, made it easy to precisely manage the structural test rig’s actuators, which can exert a tremendous amount of force in a very short time.

“Reliability is important, too,” Seneviratne added. “Every time you stop a large structural test for maintenance of test equipment, it costs tens of thousands of dollars. MTS test solutions are very reliable. You set up the actuator and it’s good to go until it’s time to recalibrate. We’ve done tens of thousands of fatigue tests with them, and the return on investment is very satisfactory.”

Seneviratne also appreciates the versatility of AeroPro software, which makes it easier for his researchers to automate the setup and execution of a wide variety of tests – some of which utilize several hundred strain gages and dozens of control channels – without having to undertake the time-consuming process of physically reconfiguring highly complex test rigs. On top of this, MTS offers high-quality service and technical support, as well as value-added services such as calibration and hydraulic system design.

“MTS has experience producing and supporting complex testing solutions,” Seneviratne concluded. “They know how to help us operate more efficiently so we can do our work at a lower cost. It’s a win-win.” 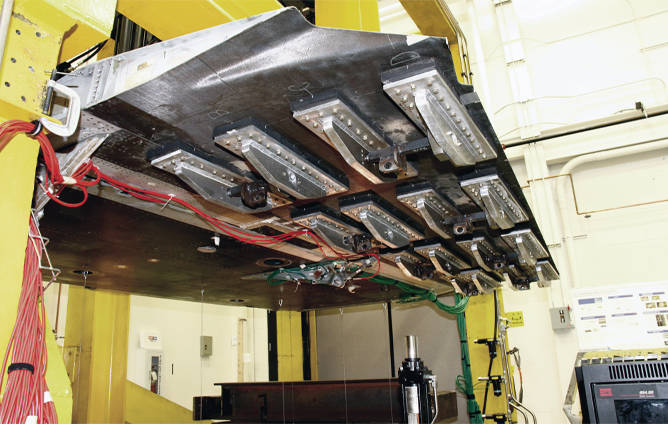