Wichita State University’s National Institute for Aviation Research (NIAR) is the largest university aviation research and development institution in the U.S. Building on a long-standing tradition of aviation excellence in Wichita, Kansas, the “Air Capital of the World,” NIAR provides aerospace manufacturers with the state-of-the-art facilities, equipment and expertise they need to conduct complex tests that can lead to breakthroughs for the entire aerospace industry.

“One of the many reasons clients choose NIAR is that they can perform all of their tests here, in one place, instead of traveling to multiple facilities to get the data they need,” said Tim Hickey, a test lab director at NIAR. “When more of our clients began to require full-scale testing, we had to make a change. We knew we had the experience, equipment and people to perform these complex tests, but we needed more space.”

To accommodate larger aircraft and perform more simultaneous full-scale structural tests, NIAR procured the former Britt Brown Arena at the Kansas Coliseum, just 11 miles away from the university’s main campus. NIAR spent 15 months gutting the arena and remaking it into the Aircraft Structural Test and Evaluation Center (ASTEC), which opened in the spring of 2013.

At 130,000 square feet, ASTEC is twice the size of NIAR’s former full-scale structural test lab, and is one of the world’s largest aircraft structural testing centers. It has the capacity to host full-scale tests on aircraft as large as a Boeing 787, with room to spare.

“Once we had the facility planned, our next step was finding test equipment we could trust,” Hickey said.

To run a high-performance facility offering virtually any kind of aerospace test – from full airframe durability and tolerance testing to coupon and component testing – Hickey and his team rely on an extensive array of MTS testing solutions. These run the gamut from the floor-standing load frames used to test aircraft components and innovative materials to the MTS AeroPro™ Software, MTS FlexTest® Controllers, MTS FlexDAC™ Data Acquisition Systems and MTS SilentFlo™ Hydraulic Power Units used in a wide variety of full-scale structural applications.

“We chose MTS equipment for the ASTEC facility because of its reliability and accuracy, as well as the versatility of the software and hardware,” Hickey said. “We have a long-standing relationship with MTS.”

Comprising a full-scale structural lab, an engineering craft lab and a mechanical test lab, the ASTEC facility enables NIAR’s clients to commission tests on all manner of commercial and military aircraft. As a result, ASTEC test teams must be able to accommodate an equally wide range of client testing needs. MTS controls and data acquisition systems help with this significantly, giving test operators the ability to add data channels very easily in between set-ups and use all available channels more efficiently.

“In the past, we had to assign an entire box of 48 data acquisition channels to a specific test station,” Hickey said. “The FlexDAC system from MTS lets us efficiently utilize available channels across the entire spectrum of tests. We can assign channels from any box to any test station. If the client decides to add a few more strain gages at the last minute, we can do that.”

The FlexDAC system is also tightly integrated with the digital controls, which helps ensure precise synchronization and eliminates the need to synthesize data manually after testing is complete.

“The integrated control and data acquisition stream helps to simplify post-test processes,” Hickey said. “It enhances the speed and ease of data processing.”

“We have a lot of repeat clients,” Hickey said. “Once they come to ASTEC and realize the full scope of capabilities and equipment we have, they want to do more kinds of testing on additional projects. It’s more efficient, and it’s much less expensive than performing all of these different tests in-house. We have yet to find a client need we haven’t been able to meet.”

ASTEC will not only help manufacturers optimize designs faster, but will accelerate validation and certification, all of which helps push research and development further. Acceleration is happening at the test program level as well, because MTS solutions enable NIAR teams to process data faster and keep the testing process moving forward at a crisp pace.

“Often we have several OEM section chiefs monitoring the strain gages during the test, and as soon as it’s over they want to see the data,” Hickey said. “With MTS hardware and software, we can deliver the complete data set in three minutes instead of the usual 30. This makes it faster for clients to put the stress analysis back into the model, verify that the test was successful and move on.”

As ASTEC continues to pursue even greater full-scale structural testing endeavors, Hickey is confident he can rely on MTS to provide expertise when needed.

“We worked closely with MTS during the design of the ASTEC facility to figure out our needs for power, hydraulics, electrical drops and more,” he said. “We continue to find the MTS team to be responsive and helpful in supporting our mission at ASTEC and at NIAR as a whole.” 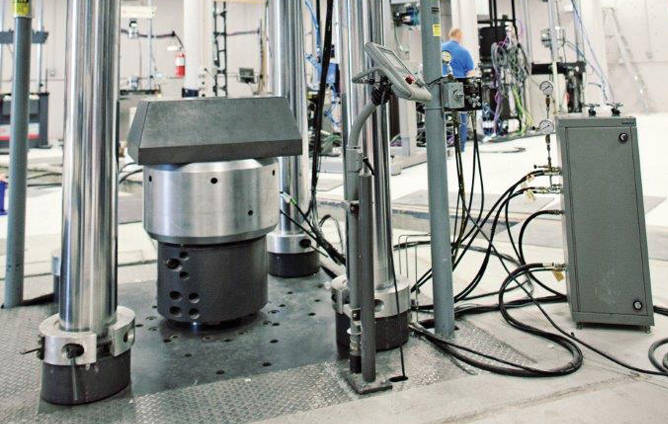