When executive decision-makers need to travel from New York to Dubai or London to Buenos Aires, no other business jet will get them there faster than the Gulfstream G650® — an ultra-large-cabin, ultra-high-speed aircraft that sets the standard for excellence in business aviation. It carries eight passengers and four crew members on nonstop flights up to 7,000 nautical miles, and at speeds up to Mach 0.925.

These evaluations became more complicated when Gulfstream decided to use an interactive mode of testing, with a pilot operating the jet’s fly-by-wire (FBW) controls. Because this type of testing involves spontaneous human commands, it provides the most accurate simulation possible for takeoff, in-air maneuvers and landing. But it requires a testing system that can apply variable forces precisely to all 12 flight control surfaces, dynamically and in real-time.

“Real-time simulation is critical for testing the G650 instrumentation, especially because it is our first aircraft with FBW controls,” said Jim Moriarty, lead technician on the project. “We have to know exactly how the aircraft would perform when receiving real flight commands.”

Even though the Iron Bird is grounded, the rudder, stabilizers and other control surfaces move just as they would in flight. Test systems must deliver precise loading and displacement, because even very small errors could potentially skew the test results or damage flight system hardware and control surfaces. Gulfstream began looking for testing partners who could integrate a system capable of interacting with the company’s flight control software.

“We knew the process would involve customized integration between our software and the loading system software,” said Dave Powell, testing lab manager for Gulfstream. “We were looking for a partner with significant technical expertise, including the ability to make it easy for us to manage advanced hardware functionality in the lab. MTS turned out to be the ideal candidate.”

To help the Gulfstream team achieve its ambitious testing objectives, MTS created a customized control scheme that detects how the control surfaces are changing and delivers these measurements through an electronic interface. The testing solution uses the data to anticipate how the pilot is directing the simulation and then applies the correct loads dynamically with minimal risk of error.

Forces are applied with 11 Model 244 hydraulic actuators and one electric actuator for the jet’s horizontal stabilizer. To help protect the Iron Bird system from any potential damage, Gulfstream employs the MTS Load Abort system, a customized manifold that simultaneously and uniformly removes all hydraulic energy present in the system if an error threshold is exceeded.

“This is the first time we designed a new aircraft using the Iron Bird in interactive mode to prove out the design prior to first flight,” Moriarty said. “It’s a safer, more efficient and more cost-effective way for us to see how forces would impact the aircraft. We’re running tests that were previously done during flight. It’s also an incredible setup. We bring in aircraft owners and FAA personnel and they always walk away impressed.”

The MTS solution enables Gulfstream to create an Iron Bird test environment with dynamic, load-following capabilities in the lab before first flight.

“One of our primary objectives was never limiting the capabilities of the rig,” said Walter Dumas, Iron Bird engineering lead. “Now we can program any simulation we want, and we have complete confidence that the MTS system will apply the correct aerodynamic loading to each surface in real-time. This helps us test the performance of the flight control hardware and software systems, as well as simplify the integration of other parts — all of which helps validate these innovative new technologies.”

By incorporating MTS technology, the lab has been able to accelerate its leading-edge flight control testing. It is completing tests more quickly, which improves efficiency and keeps the G650 on pace for its planned entry-into-service date. Introduced in 2008, the G650 completed its first flight in November 2009 and began flight testing in December 2009. Today, Gulfstream continues to expand the G650 test fleet, working toward FAA and EASA certification in 2011 and entry-into-service in 2012.

“The Iron Bird testing system played a key role in the success of the G650’s first flight,” Powell said. “The testing we performed in 2009 really shook down the flight control systems and identified areas for improvement. We were able to work with our engineering team and our suppliers to correct potential issues proactively and make sure the aircraft met performance expectations from day one.”

Smooth collaboration between the MTS and Gulfstream teams was essential to a successful integration. MTS software engineers worked on-site at the Gulfstream lab, and remained available by phone. MTS engineers provided assistance during the design and development, integration, implementation and training phases of the project, as well as offering ongoing technical support.

“The experience with MTS was great,” Powell said. “Every time I needed them, they were a phone call away. The field service team was very responsive, and the work they did was phenomenal. As a result, the Iron Bird test rig feels like a system we designed in-house. MTS should be proud of its contributions to our success with the G650 aircraft. I know we are.” 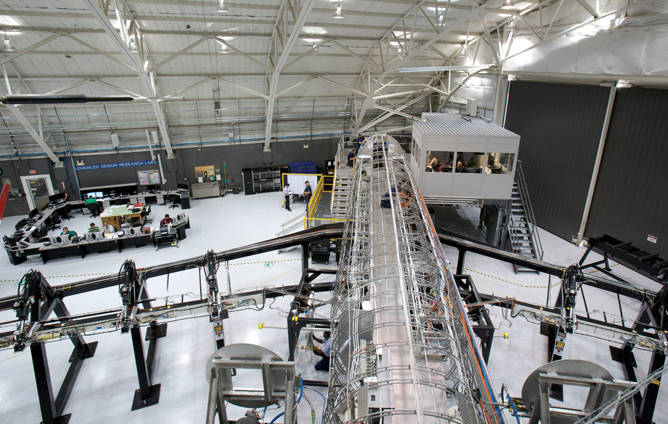 MTS enables a leading aircraft manufacturer to optimize the flight controls of its flagship business jet.