Headquartered in Fort Worth, Texas, Bell Helicopter is an industry-leading aircraft manufacturer and the first company to obtain commercial certification for a helicopter. Throughout a history that spans more than eight decades, Bell Helicopter has delivered more than 35,000 commercial and military aircraft. It is a globally trusted brand and a premier provider of vertical lift aircraft.

Staying ahead in a competitive and highly regulated industry means Bell Helicopter must bring innovative products to market as quickly and cost-efficiently as possible with superior confidence in each new design’s performance. This makes accurate test data an extremely valuable resource. Nobody knows this better than Mark Southard, lead test engineer for the Bell 525 Relentless, which features a fully integrated avionics flight deck and advanced fly-by wire flight control system. As soon as planning began for the 525 test program, the Mechanical Systems Test Laboratory realized it was running out of floor space.

“It became clear very early on that our test facility couldn’t accommodate the footprint of the test fixtures we would need for the 525 Relentless,” he said. “After extensive research, we determined that our best option was to convert an existing hangar into an overflow testing facility.”

“It was a very challenging year making sure everything was set up properly to accommodate our new test programs,” Southard said. “One of the ways we mitigate risks to our budget and schedule is with reliable infrastructure. We needed test equipment we could trust to deliver accurate data that supports the certification and verification of our products.”

The new facility occupies 20,000 square feet of space at the company’s Fort Worth campus. At the moment, six engineers and five technicians are assigned to active and upcoming tests in the new test lab. There are currently 12 independent test machines scheduled for the hanger with footprints ranging from 5’x14’ to 20’x50’.

“When we designed the new facility, dependable hydraulics and test controls were two top priorities,” Southard said. “That’s what MTS brought to the table. We are reducing the risk of bad data with MTS actuators, over which we have very good control. Our accuracy is going to be spot on.”

“Much of our testing results in feedback to the designers to help uncover potential problems early on and redirect their efforts,” Southard said. “Without a mechanical test, you really don’t know what you have. The tests we run provide assurance that our products are safe and reliable for customers.”

Tests at the new facility will provide the structural data Bell Helicopter needs to support FAA certification for the 525 and Transport Canada Certifying Authority (TCCA) certification for the 505. Specifically, they demonstrate the structural integrity and durability of the airframe and rotor components, which are subjected to a spectrum of simulated flight and ground loads. The company selected MTS solutions to ensure superior, reliable performance for these mission-critical tests.

For example, a test system can easily accumulate 60 million cycles qualifying a single component. Then the actuators are reconfigured for another test, and so on. Previously, Bell Helicopter used industrial hydraulic cylinders for these applications. But oil leaks from the high-pressure and low-pressure seals were frequent and problematic. Single-ended, heavy-duty MTS actuators, which operate under precision servovalve control, were an easy choice.

“MTS actuators have been a resounding success due to their maintenance-free performance,” Southard said. “For the 525 FTA application, we chose MTS Model 201 actuators for their high-quality performance, with the intention of reusing them in future airframe testing.”

Proven performance led to the selection of MTS FlexTest digital controls as well. Test labs at Bell Helicopter use proprietary test software and hardware, but these tools could not easily accommodate the required number of control channels for airframe fatigue testing. To find a better solution, Southard’s team spoke with engineers at several test facilities. Feedback from the Cessna test lab about the reliability and stability of the FlexTest 200 helped solidify the final decision.

MTS FlexDAC was chosen for its ability to change the way the programs acquire test data. Historically, instrumentation for flight and fatigue tests were full-bridge gages with bridge completion circuits located downstream from strain gages. MTS FlexDAC units have built-in bridge completion circuits, allowing test articles to be instrumented as quarter-bridge channels for the first time.

“The time and material cost savings have been significant with MTS FlexDAC,” Southard said.

“With help from MTS, we were able to interface with the MPCM for shutdown protection in the event of a fire alarm,” Southard said. “Plus, we were able to add electric actuators to the gate valves on the common pipe joining the four HPUs, which allowed us to reduce the size requirement for spill containment and save even more floor space in the lab.” 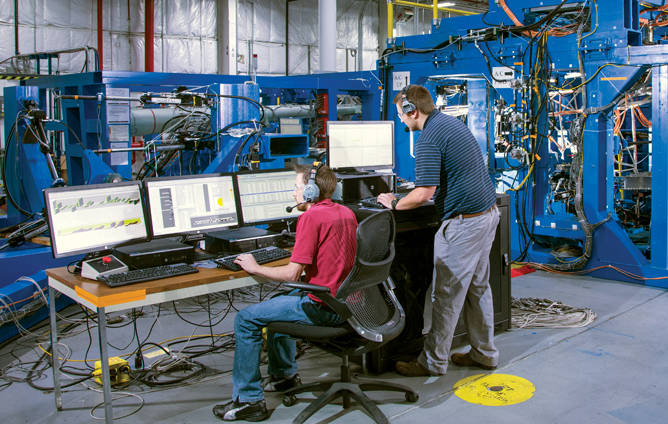